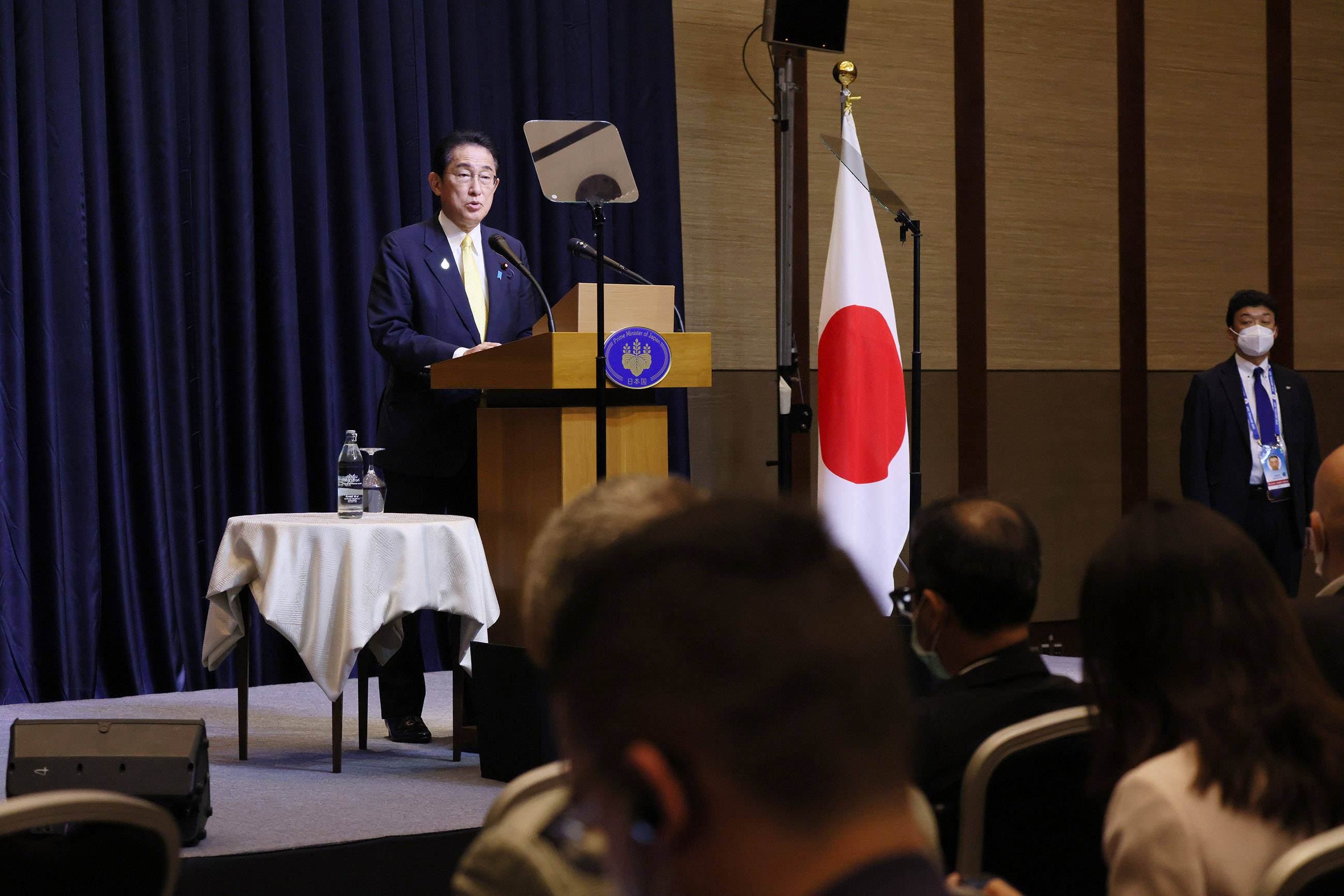 As I wrap up my visit to Southeast Asia, I will make a few remarks.

Over the span of eight days, I have attended Association of Southeast Asian Nations (ASEAN)-related summit meetings, the G20 Bali Summit, and the Asia-Pacific Economic Cooperation (APEC) Economic Leaders' Meeting. This series of meetings has been an invaluable opportunity for the leaders of major nations around the world to come together in person. Many national leaders, including President Biden of the U.S., President Xi Jinping of China, and President Yoon of the Republic of Korea (ROK), sat down alongside me for talks. Saying what needs to be said, I was able to deepen our cooperation and trust.

Aggression against Ukraine and increasing tensions in the regional situation in East Asia have brought the peaceful world order to a major corner needing to be turned. A sense of unease is also growing among the public. In advancing the greatest mission for politics that protects Japan and maintains the Japanese people's peace of mind in the 21st-century world, I feel I succeeded in taking a significant step forward when I look back on this past week.

As for the way in which I consider it a significant step forward, first I wish to talk about the major bilateral summit meetings I held.

In the Japan-U.S. summit meeting I had with U.S. President Biden, we shared once again the same recognition of the role the solid Japan-U.S. Alliance plays, and we agreed to further strengthen the Alliance's deterrence and response capabilities in order to foster the peace and prosperity of both the region and the international community overall.

We also held Japan-China and Japan-ROK summit meetings for the first time in roughly three years for each of them. Although for both countries, various issues do exist between us, I had a thorough and constructive exchange of views with both of my counterparts.

With President Xi, whom I met face-to-face for the first time, I had frank and in-depth discussions regarding broad directions for Japan-China relations and also regarding various issues and outstanding areas of concern, as well as the potential for cooperation between us. On that basis, we agreed to continue to maintain close communication, including at the leaders' level, as we work to establish a constructive and stable Japan-China relationship. Regarding the situation in Ukraine as well, we were in full agreement in our views that nuclear weapons must not be used and that nuclear war must not take place.

President Yoon and I confirmed we will act in cooperation to address North Korean issues and to realize a Free and Open Indo-Pacific. We also agreed once again to work towards the swift resolution of the outstanding concerns between our two countries.

I also consider it to have been a major step forward that, through this series of international meetings, we succeeded in sending out resolute and forward-looking messages to the international community. I myself participated having three aims for realizing the peace and prosperity of both Japan and the world.

Those three aims were, first, maintaining or expanding international cooperation focused on Russian aggression against Ukraine; second, strengthening Japan's relations with the Global South; and third, responding to the increasingly severe regional environment, including the North Korea situation and also the East China and South China Seas.

As for the first point, Russian aggression against Ukraine is an issue that undermines the very foundation of the international order, and it continues to be necessary for relevant countries to act in cooperation as they resolutely work to resolve this issue. At the G20 summit, in which Russia also participates, the Leaders' Declaration includes that most members strongly condemned the war in Ukraine, and that Russia's nuclear threat is absolutely inadmissable and it goes without saying that nuclear weapons should never be used under any circumstances, points for which Japan has repeatedly made appeals. The G20 issuing such a declaration will also tie into the discussions towards nuclear disarmament that will take place at next year's G7 Hiroshima Summit, and I highly evaluate this outcome.

In addition, in response to an explosion in Poland that occurred while the G20 Summit was underway, the leaders of the G7 and the North Atlantic Treaty Organization (NATO) member countries gathered on an emergency basis and were able to undertake coordination on the matter swiftly.

The second point is that it is imperative for us to strengthen our relations with the Global South in order to curb division within the international community, which is said to be about to arise over the Ukraine situation and other issues.

For that reason, making use of the opportunities to engage in an exchange of views with the leaders of the ASEAN member countries, Rwanda, South Africa, and Chile, among others, I communicated to them the efforts Japan has been making regarding food and energy security, climate change, global health, and other issues, and I made a strong appeal regarding the extreme importance for the development of the Global South that the international order based on the rule of law be maintained and strengthened.

And then, regarding the third point, amid an increasingly severe regional security environment, it is essential for us to build up cooperation and dialogue with various countries in order to defend the peace and stability of the Indo-Pacific. During this trip, I seized every possible opportunity to convey to my counterparts the strong sense of urgency I feel regarding the security environment, including North Korea's ballistic missile launches that have been unprecedented in both their frequency and their manner and attempts to unilaterally change the status quo in the East China Sea and South China Sea, and also regarding the abductions issue. After communicating that sense of urgency, I appealed to them about the necessity of responding to these issues.

Next year, we mark the 50th Year of ASEAN-Japan Friendship and Cooperation, and we will hold an ASEAN-Japan Commemorative Summit in Tokyo in roughly December. Moreover, Japan will hold the presidency of the G7 as the only Asian member country and also begin serving as a non-permanent member of the UN Security Council, elected from Asia.

To bolster Japan's own security and prosperity, I myself will stand at the fore as we continue to respond to the various issues facing the international community, including the prosperity of Asia, the global economy, and global-level issues. I will do this by, among other means, promoting a Free and Open Indo-Pacific (FOIP), which fundamentally shares the same principles as the ASEAN Outlook on the Indo-Pacific (AOIP).

I wish to express my appreciation once again to all the officials of the governments involved in the hosting of these international meetings, and first and foremost to the chairs of the meetings, Prime Minister Hun Sen of Cambodia, President Joko of Indonesia, and Prime Minister Prayut of Thailand.

Before I end my remarks, I wish to make a statement about the new bill designed to provide relief for victims of malevolent donations practices and other manipulative acts.

As for this new bill, an outline of a system that ensures the donation process is conducted appropriately, and that is designed to provide relief against damages and prevent the recurrence of damages, was presented to the secretaries-general of six political parties yesterday. I have been briefed that the six parties have urged the Government to submit a bill to the Diet at an early time.

In order to make a system that is effective in providing relief to victims and preventing the recurrence of damages, the Government intends to submit a bill during the current session of the Diet at the earliest possible time, taking into account the views of both ruling and opposition parties.