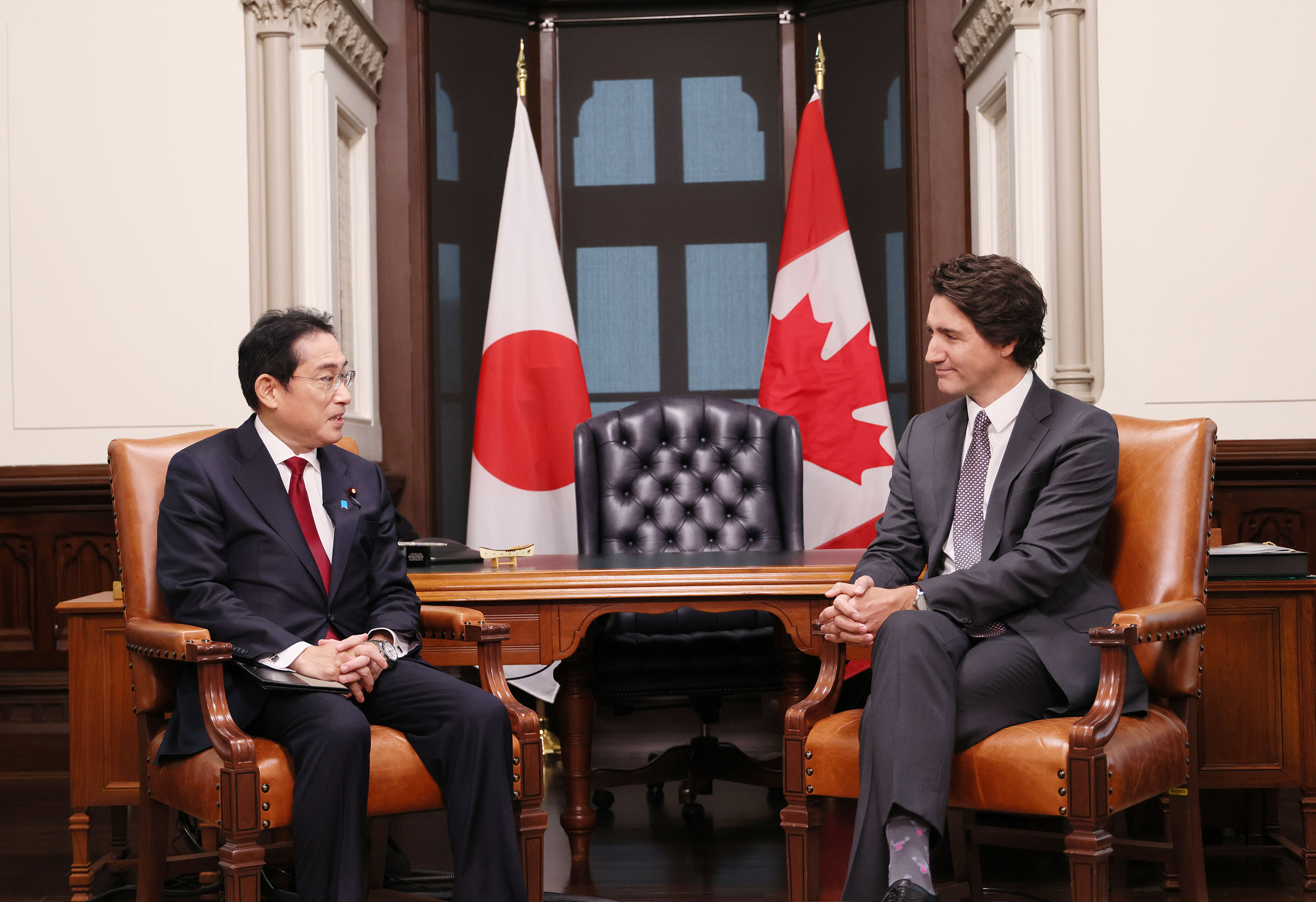 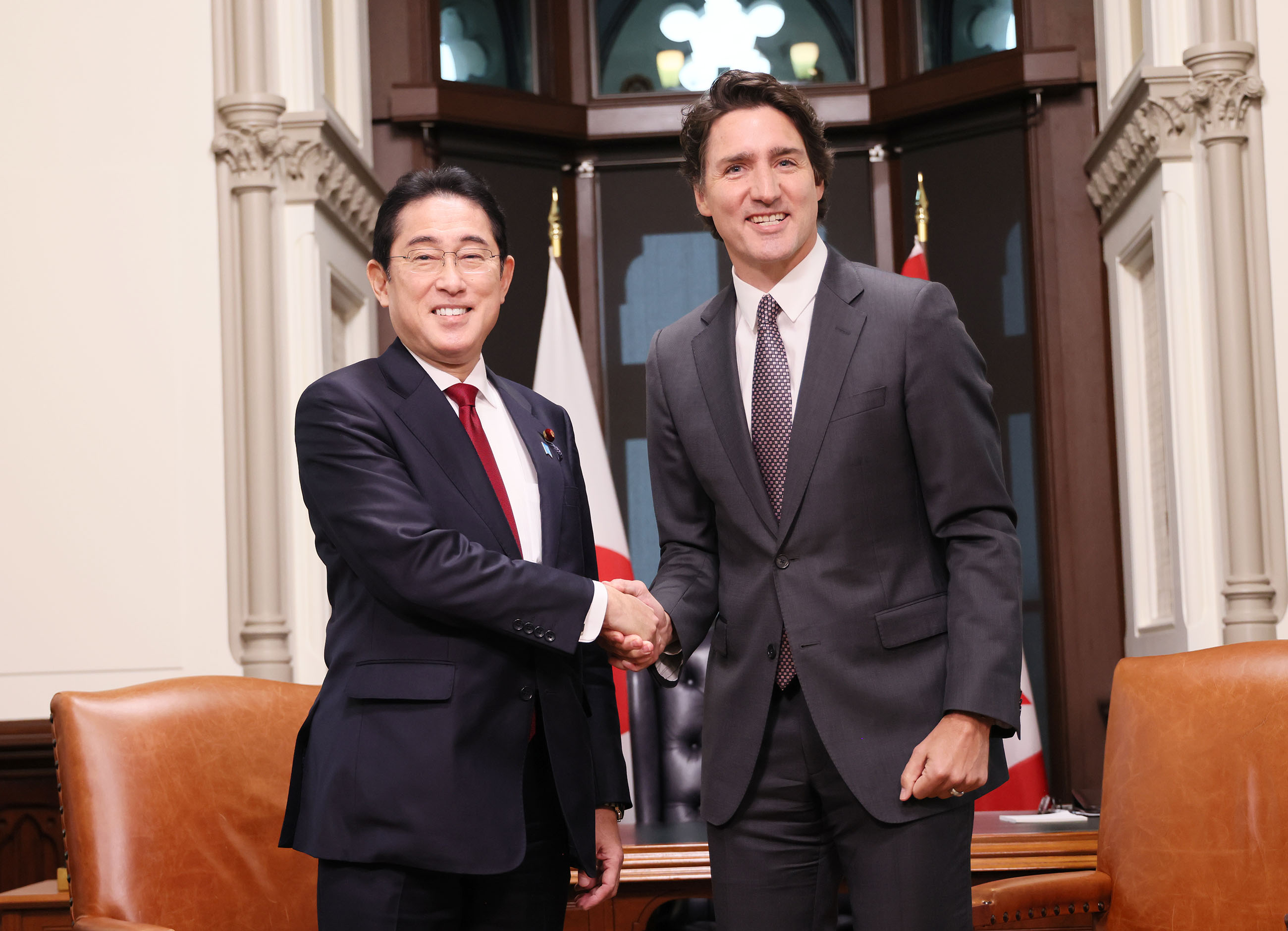 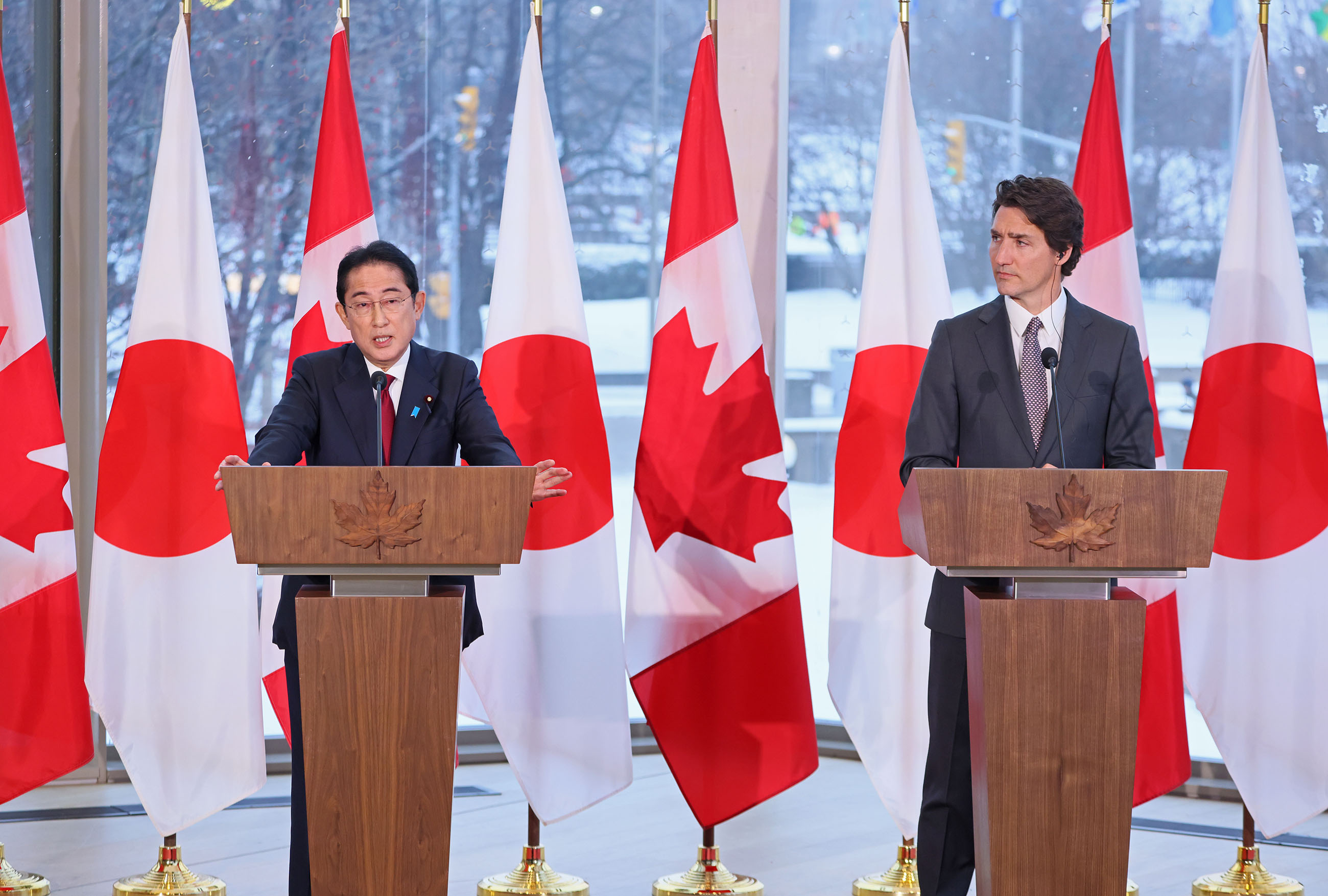 On January 12, commencing at 11:30 am (local time; January 13, 1:30 am Japan Time), for 75 minutes, Mr. KISHIDA Fumio, Prime Minister of Japan, held a summit meeting with the Right Honourable Justin Trudeau, Prime Minister of Canada, while visiting Ottawa, Canada. The overview of the meeting is as follows.
After the summit meeting, Prime Minister Kishida attended a luncheon with business leaders hosted by Prime Minister Trudeau, where they exchanged views on the potential of economic relations between Japan and Canada in a friendly atmosphere.

1. At the outset, Prime Minister Trudeau welcomed Prime Minister Kishida's visit to Canada in the positon and stated that he would like to cooperate to further strengthen Japan-Canada relations. In response, Prime Minister Kishida expressed his gratitude for the warm welcome, and said it is a great pleasure to visit Canada for the first time in seven years since he visited as Minister for Foreign Affairs in 2016 and for the first time as Prime Minister. Prime Minister Kishida also expressed that he would like to collaborate with Canada to maintain and strengthen the peace and stability of the region and international community as Japan and Canada are both G7 members and Canada is an important strategic partner in the Indo-Pacific region that shares universal values such as freedom, democracy, human rights, and the rule of law.

3. Prime Minister Kishida also welcomed Canada's announcement of the "Indo-Pacific Strategy" last November and stated that the Strategy is in line with the "Japan-Canada Action Plan contributing to a free and open Indo-Pacific region," which was announced last October. The Prime Minister expressed his intention to work together with Canada, a country strengthening its engagement in the Indo-Pacific region as a Pacific nation, toward the realization of a "Free and Open Indo-Pacific (FOIP)" through a steady implementation of the "Action Plan.”

4. The two leaders exchanged their views on regional issues, including Ukraine, North Korea, and China.

(1) Regarding Russia's aggression against Ukraine, the two leaders concurred to maintain the unity of the G7 and to continue strict sanctions against Russia and strong support for Ukraine. They also confirmed that they are seriously concerned about Russia's nuclear threats, which are absolutely unacceptable, and that Russia should never use nuclear weapons under any circumstances.
(2) The two leaders concurred that North Korea’s ballistic missile launches which are unprecedented both in their frequency and in their manner are absolutely unacceptable, and confirmed that they will continue to work closely together toward the complete denuclearization of North Korea in accordance with UN Security Council resolutions. They also confirmed that they will continue to cooperate in dealing with North Korea, including in addressing to illegal ship-to-ship transfers and the abduction issue.
(3) The two leaders strongly opposed unilateral attempts to change the status quo by force in the East and South China Seas, and confirmed to continue close coordination in addressing various issues related to China.
5. The two leaders also had a candid discussion on the CPTPP and concurred on the importance of maintaining the high standards of the agreement as well as to continue to work closely together. The two leaders also concurred to strengthen cooperation in economic areas including energy and food, as well as in the areas of development finance and economic security including responses to economic coercion.