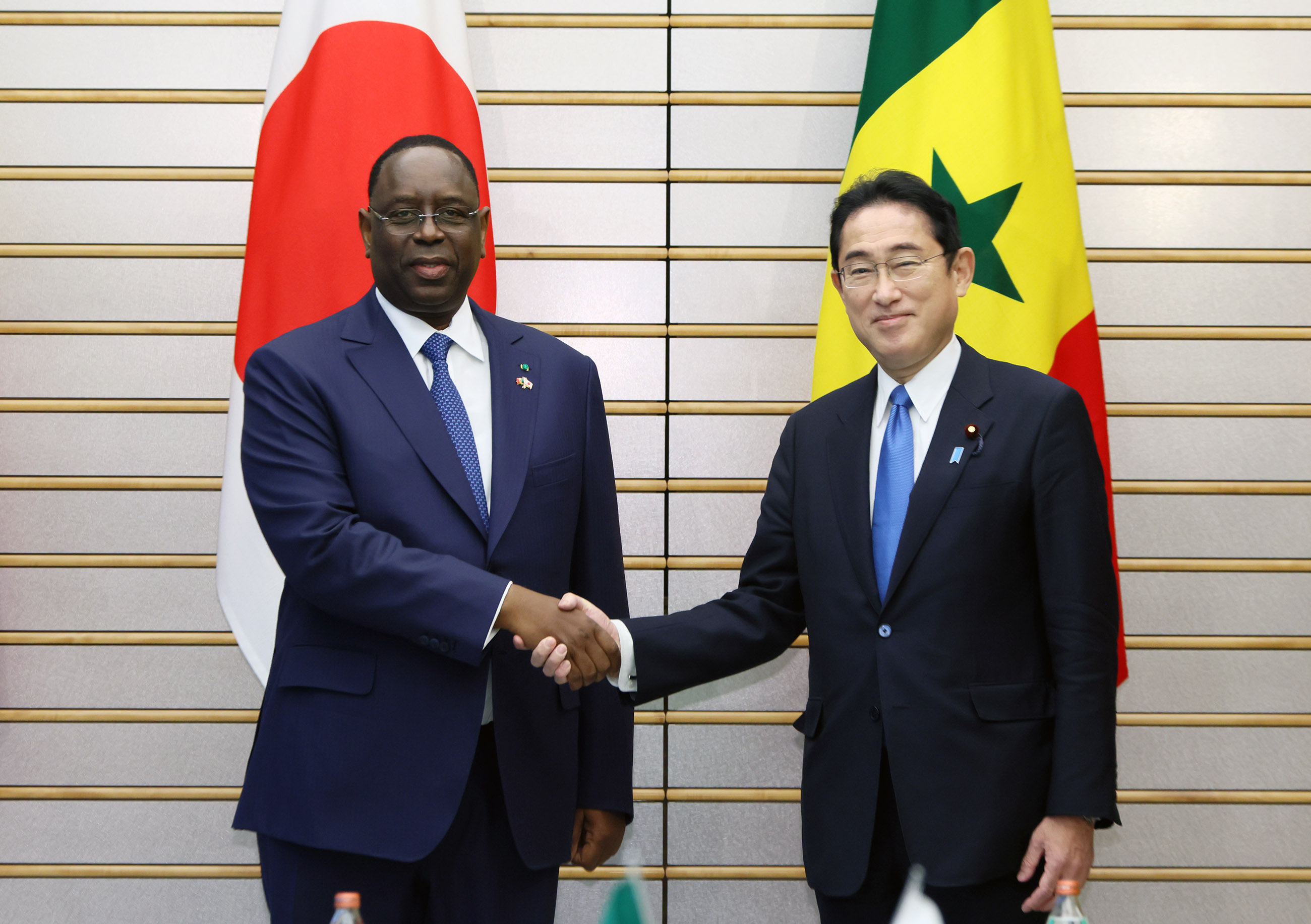 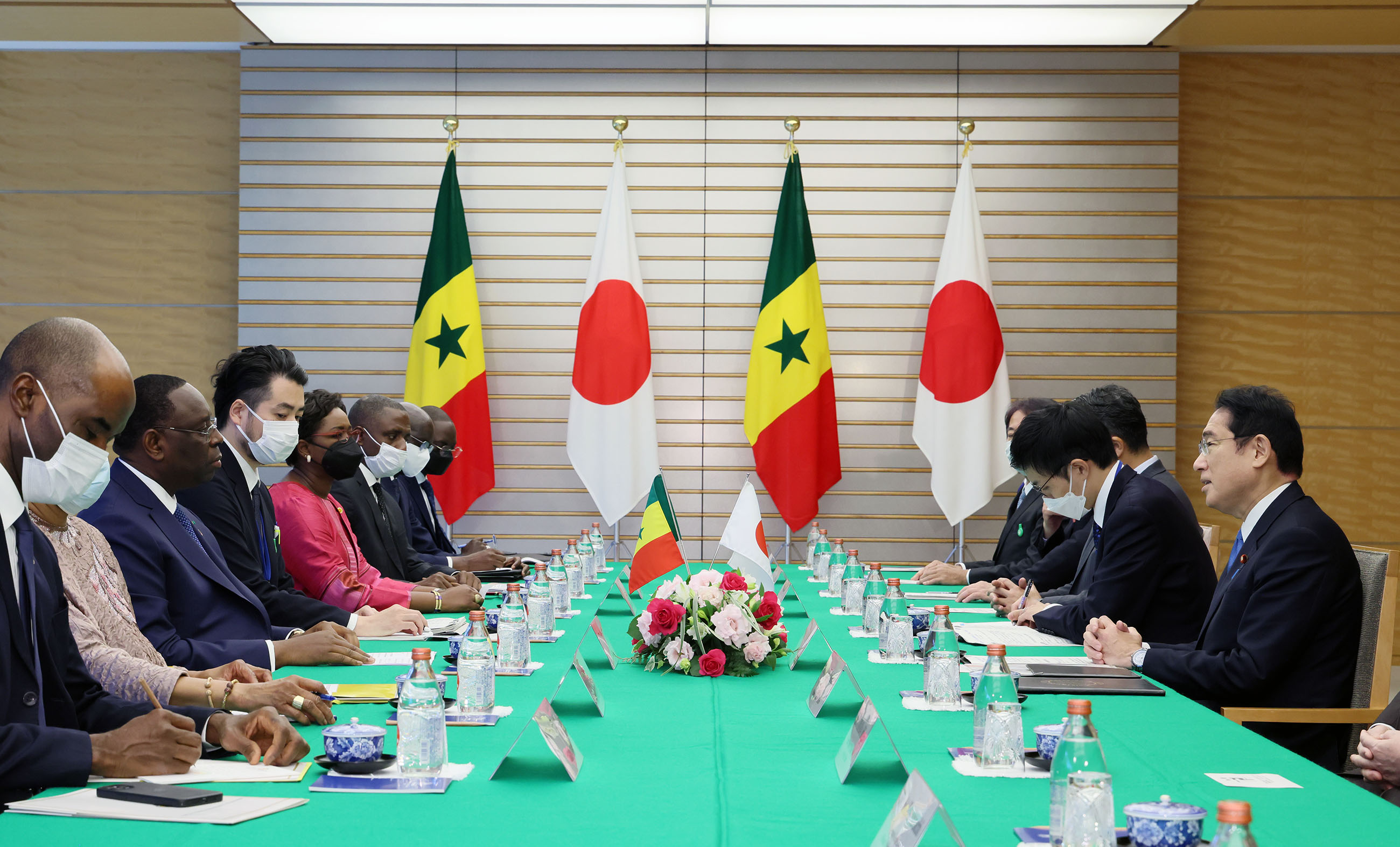 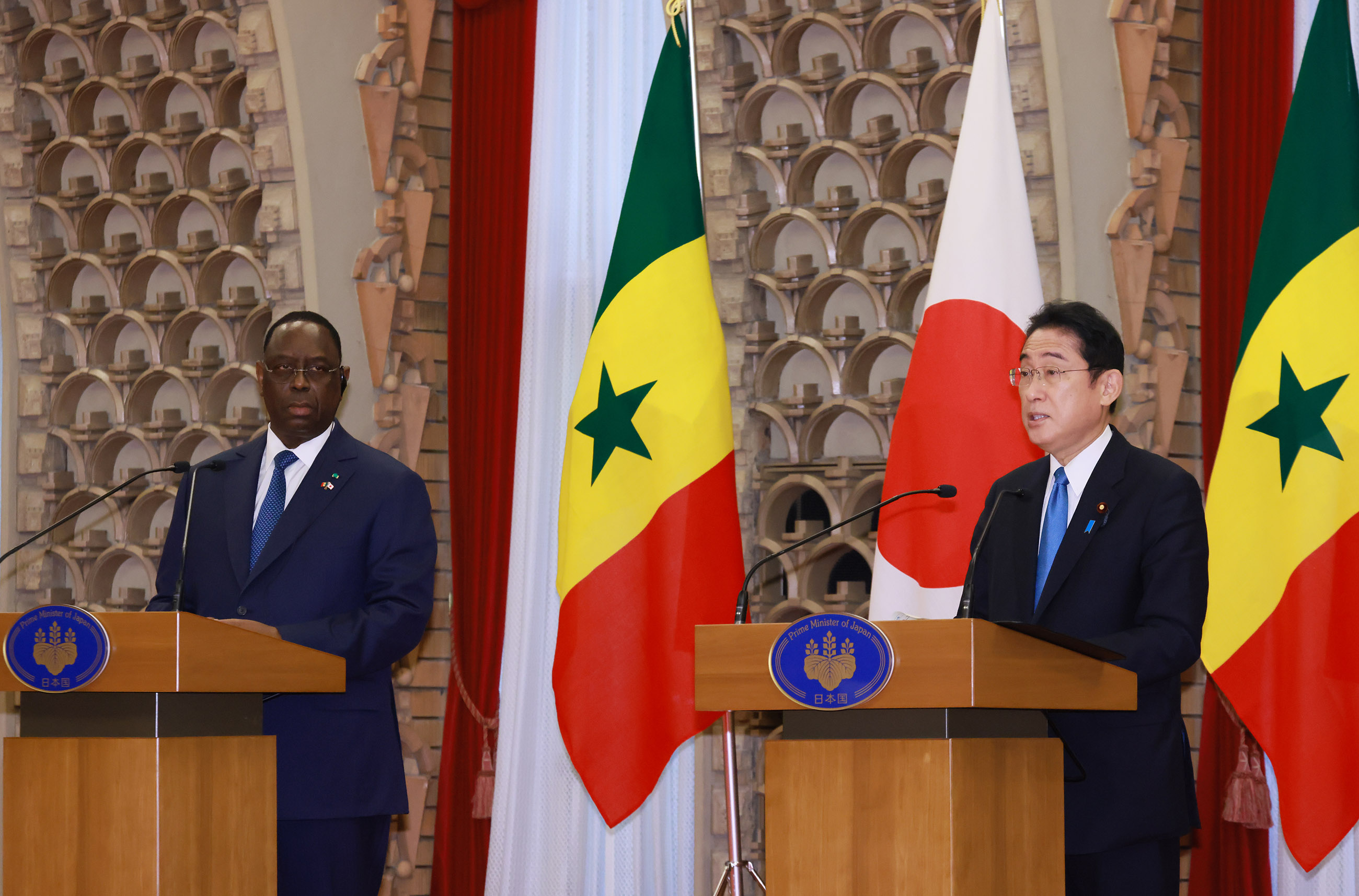 On December 19, commencing at 11:05 a.m., for approximately 35 minutes, Prime Minister KISHIDA Fumio held a Japan-Senegal Summit Meeting with H.E. Mr. Macky Sall, President of the Republic of Senegal, who was on an official working visit to Japan. Following the joint press announcement, the two leaders held a working lunch from 12:05 p.m., approximately for 60 minutes. The overview of the meeting is as follows.

1. Overview
(1) Prime Minister Kishida stated that Japan and Senegal are strategically important partners that share fundamental values such as democracy and the rule of law. He also expressed his gratitude for President Sall’s contribution as co-chair at the Eighth Tokyo International Conference on African Development (TICAD 8) and his willingness to lead the outcome of TICAD 8 to the further strengthening of Japan-Africa relations.

(2) In response, President Sall stated that he is pleased to be able to visit Japan this year, and expressed his desire to further advance bilateral relations in various fields and work closely together in the international community.

2. Bilateral relations
(1) The two leaders affirmed to promote further efforts regarding, among others, the investment and expansion of Japanese companies including start-ups and in the area of natural resources development, "invest in people," which Japan considers important, achievement of universal health coverage (UHC) , as well as to seek for the active exchange of the two countries in various fields such as Expo 2025 Osaka, Kansai, Japan and the Youth Olympic Games Dakar 2026. They shared the view that the two countries will continue to build the comprehensive relationship through development cooperation, the promotion of business and people-to-people exchanges.

(2) Following the summit meeting, the signing ceremony of the Exchange of Notes for "the Development Policy Loan for the Education Sector" and "the Project for the Construction of National Analysis Laboratory for Fishery Products" by Mr. HAYASHI Yoshimasa, Minister for Foreign Affairs of Japan, and H.E. Mrs. Oulimata SARR, Minister of Economy, Planning and Cooperation took place in the presence of the two leaders.

3. Cooperation in the international arena
(1) Prime Minister Kishida emphasized that unilateral attempts to change the status quo by force must not be tolerated anywhere in the world, and that a united response by the international community is necessary. Prime Minister Kishida then stated that Japan is promoting efforts toward the realization of a "Free and Open Indo-Pacific (FOIP)" and would like to cooperate with Senegal.
(2) Prime Minister Kishida emphasized that Russia’s aggression against Ukraine is outrageous act which infringe upon Ukraine’s sovereignty and territorial integrity and the two leaders confirmed that this situation where worldwide food and energy crises are caused must be stopped immediately. Prime Minister Kishida also stated that, as Japan is the only country to have ever suffered atomic bombings during war, Russia’s nuclear threat is absolutely unacceptable, and that Russia should never use nuclear weapons under any circumstances.
(3) Furthermore, Prime Minister Kishida announced that Japan supports the joining of the African Union to G20, based on the belief that it is important for Africa to expand its presence in the G20 in light of the increasing role of African countries in the international community in recent years.
(4) The two leaders shared their view that it is essential to strengthen the functions of the United Nations, including the Security Council reform. Prime Minister Kishida also expressed his gratitude for Senegal's support for the draft resolution on the elimination of nuclear weapons adopted in the Plenary Meeting of the United Nations General Assembly.
(5) The two leaders shared the view that a realistic energy transition is important and that they will continue to work closely together.
(6) The two leaders also discussed regional and international issues such as the response to economic coercion and development finance, the response to North Korea including the nuclear, missile issues and the abductions issues, nuclear disarmament and non-proliferation as well as peace and security in Africa, and they affirmed the continued cooperation of the two countries.