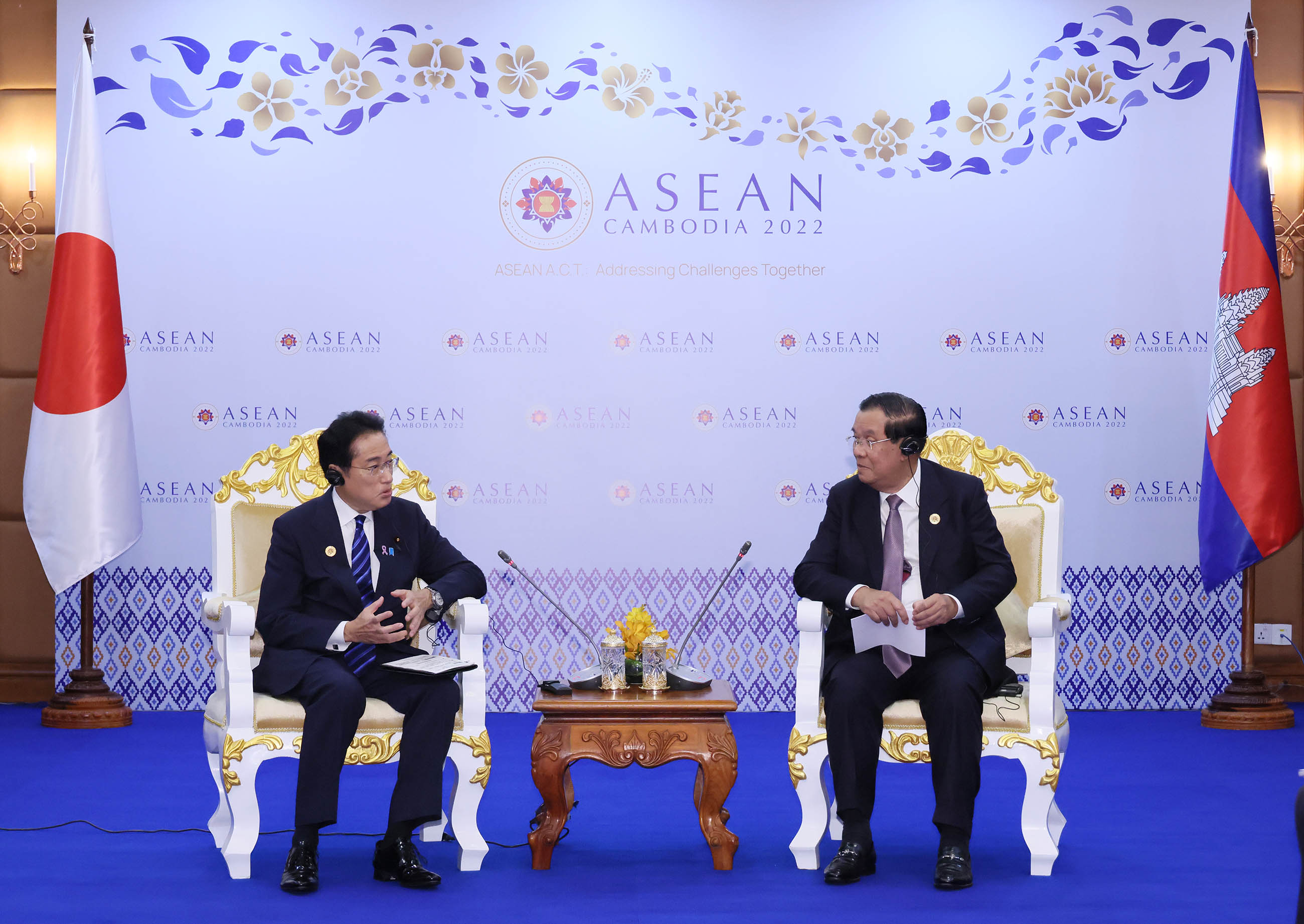 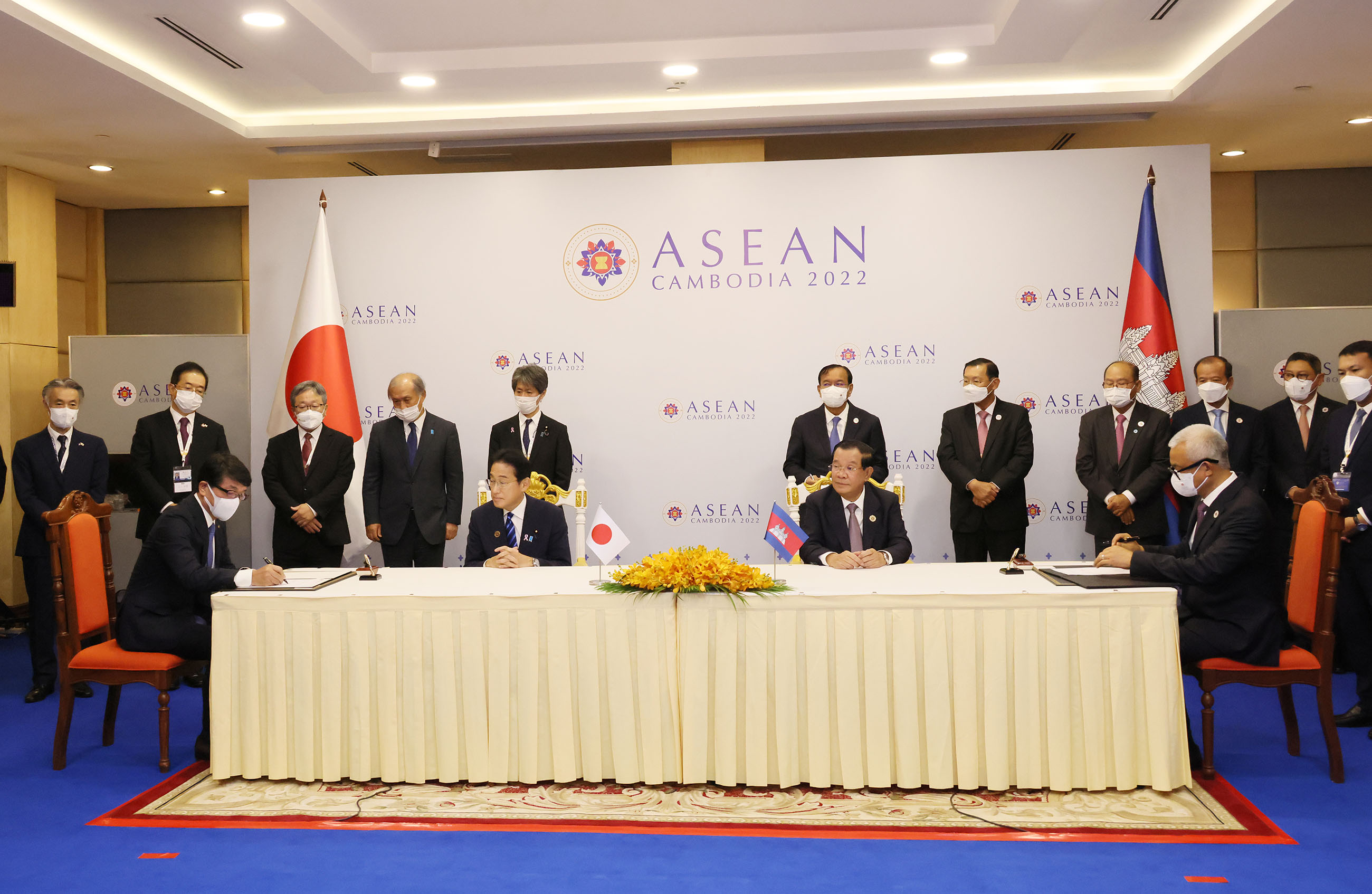 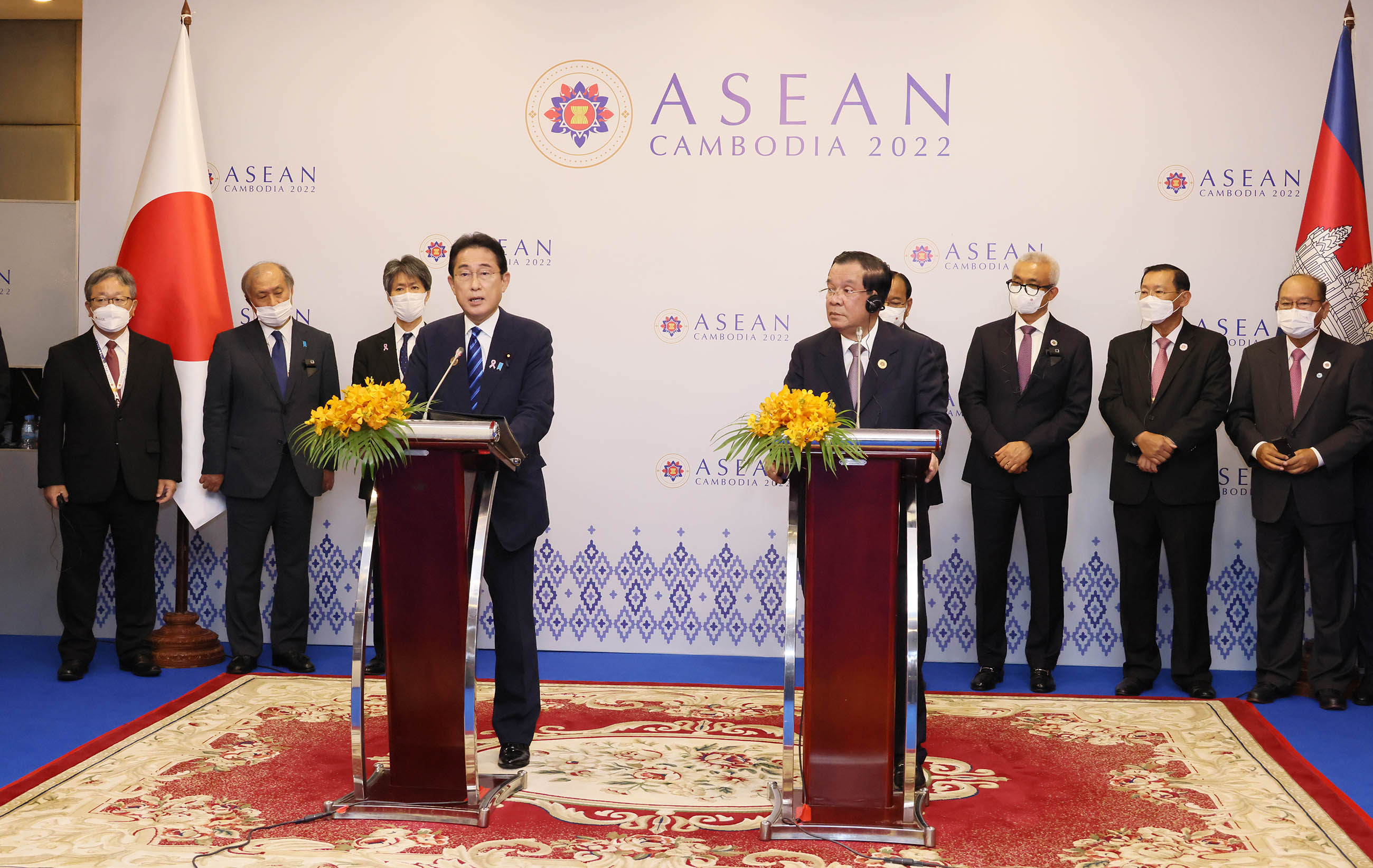 After the meeting, the two leaders presided over the signing of an exchange of diplomatic notes regarding four grant aid projects for Cambodia, as well as the signing of an MOU between Toyota Tsusho Corporation and the Cambodian Ministry of Economy and Finance regarding collaboration for the development of Cambodia's automobile industry, and made a Joint Press Announcement. Deputy Chief Cabinet Secretary ISOZAKI Yoshihiko and others attended the meeting.

2. Bilateral relations
(1) Overview
The two leaders agreed to upgrade the bilateral relations to a “comprehensive strategic partnership” on the occasion of the 70th anniversary of the establishment of diplomatic relations between the two countries next year, on the basis of the progress made in the bilateral cooperation in recent years. They also agreed to take this opportunity to further enhance cooperation bilaterally.

(3) Economic relations
Prime Minister Kishida stated that Japan intends to cooperate in the industrial development of Cambodia and the fostering of industrial human resources. In response, Prime Minister Hun Sen highly appreciated the contribution of Japanese companies to Cambodia's economy and industry and expressed his desire to attract more investment from Japanese companies.

(4) Promotion of cooperation in new areas
The two leaders welcomed the signing of new four grant aid projects, including a cyber security project, which they characterized as a first step toward new cooperation in the digital and economic security areas that were identified as new areas of cooperation in the Summit Meeting in March. Prime Minister Kishida also expressed Japan’s intention to continue to work together on the construction of a 5G network and the development of  human resources and his desire to work together to realize the concept of “Asia Zero Emissions Community.”

(5) Democracy and human rights
Prime Minister Kishida stated that Japan will continue to support the democratic development of Cambodia and expressed his hope that the general elections next year will be held in a free and fair manner and reflect the diverse voices from the Cambodian people. Prime Minister Hun Sen stated that he will make efforts to hold free and fair elections.

(6) 70th anniversary of the establishment of Japan-Cambodia diplomatic relations
Prime Minister Kishida expressed his hope that as next year marks the 70th anniversary of the establishment of diplomatic relations between Japan and Cambodia, more exchanges will take place between the two countries, including those through tourism.

(2) Regional situation
The two leaders also exchanged views on situations surrounding North Korea and the East and South China Seas. Prime Minister Kishida expressed his gratitude to Cambodia for consistently standing with the Japanese people in dealing with North Korea’s nuclear and missile issues and the abductions issue, as well as his will to continue to work together with Cambodia. In response, Prime Minister Hun Sen condemned launches of ballistic missiles by North Korea, including the one which flew over Japanese territory, and expressed his willingness to cooperate toward the immediate resolution of the abductions issue.