The 25th ASEAN Plus Three (Japan-China-Republic of Korea) Summit 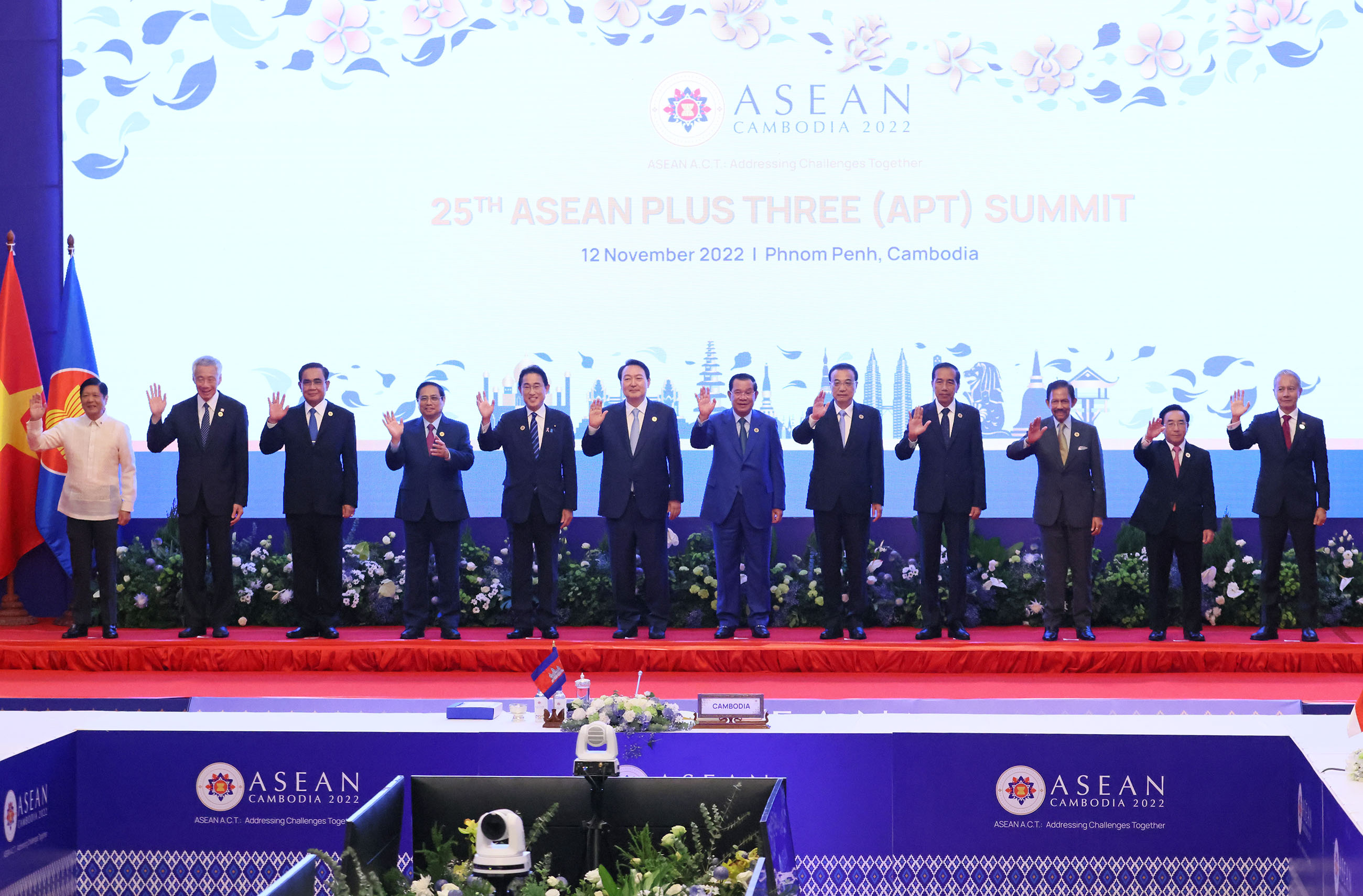 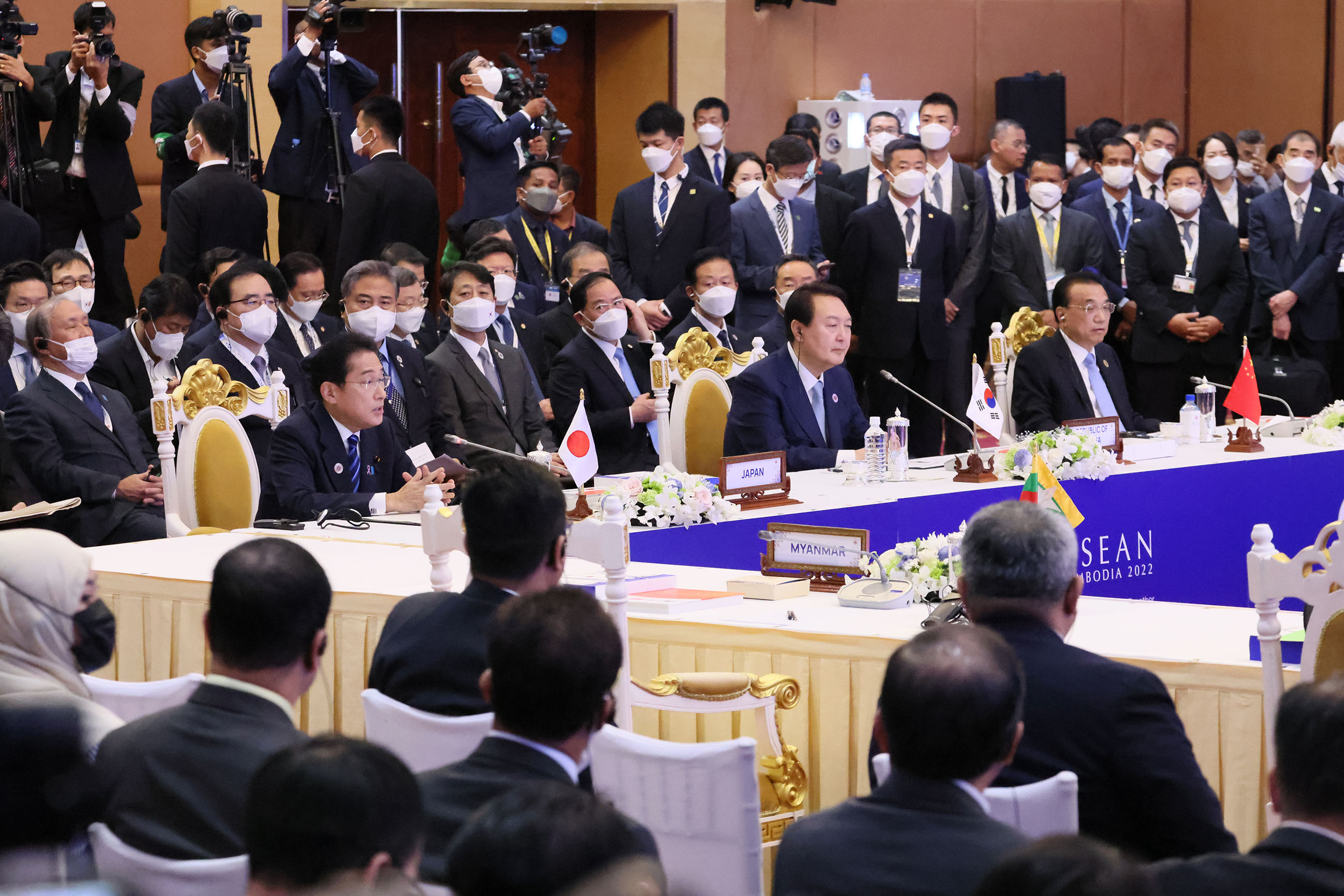 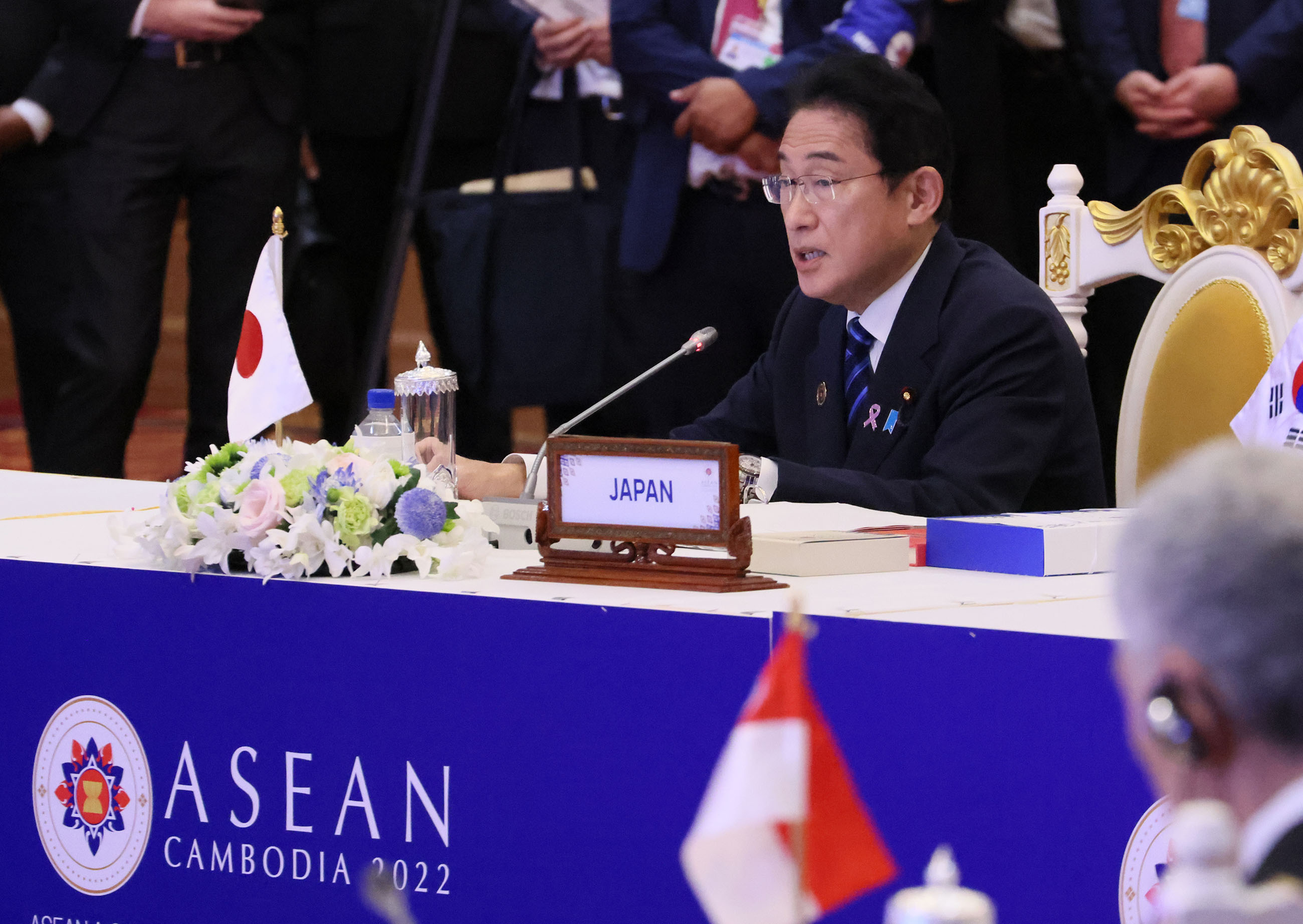 On November 12, commencing at 8:20 a.m. (local time; 10:20 a.m. on November 12 JST) for about 1 hour and 30 minutes, the 25th ASEAN Plus Three (Japan-China-Republic of Korea) Summit (Chair: Samdech Akka Moha Sena Padei Techo Hun Sen, Prime Minister of the Kingdom of Cambodia) was held in Phnom Penh, Cambodia. Mr. KISHIDA Fumio, Prime Minister of Japan, attended the meeting. An overview of the meeting is as follows.

(a) Maritime Cooperation
Japan will promote efforts such as training Vessel Traffic Services (VTS) operators, and providing support for the formulation of National Action Plans and ocean monitoring on marine plastic litter.

(b) Connectivity
Japan will facilitate quality infrastructure investment based on the Master Plan on ASEAN Connectivity 2025. At the same time, Japan will also support soft connectivity areas such as Information and Communication Technologies (ICTs), development of legal system and fostering people-to-people exchanges.

(c) SDGs
Towards achieving the SDGs, based on the concept of human security, Japan will support the ASEAN Plus Three Emergency Rice Reserve (APTERR) and the ASEAN Food Security Information System (AFSIS), continue to fully support the ASEAN Centre for Public Health Emergencies and Emerging Diseases (ACPHEED) for its expeditious operationalization, and support balanced decarbonization which addresses climate change while ensuring energy security and sustainable growth, among others. Japan will assist ASEAN in formulating a region-wide ASEAN Climate Change Strategic Action Plan towards 2030.

(d) Economy and Finance
Japan will work together for investment in innovation and start-ups, and enhanced resilience of supply chains, supporting the implementation of the ASEAN Comprehensive Recovery Framework.
In the area of finance, Japan will contribute to discussions on further strengthening the functions of CMIM (Chiang Mai Initiative Multilateralisation). Moreover, Japan continues to contribute to achieving concrete outcomes next year on the new initiatives proposed by Japan in the ASEAN Plus Three framework on the impact of financial digitalization and strengthening the region’s financial resilience against natural disaster risks.

(1) Situation in Ukraine
Prime Minister Kishida stated that Russia’s aggression against Ukraine and the illegal “annexation” infringe upon sovereignty and territorial integrity of Ukraine and violate international law including the United Nations Charter, and emphasized that any unilateral attempts to change the status quo by force should never be tolerated anywhere in the world including Asia. He also pointed out that maintaining and strengthening a free and open international order based on the rule of law is indispensable for sustainable growth and the sound development of the international community. Prime Minister Kishida also stressed that Russia’s threat to use nuclear weapons is absolutely unacceptable, let alone the use of such weapons.

(2) North Korea Prime Minister Kishida stated that North Korea has been launching the spate of ballistic missiles with extremely high frequency since last month, including the one which flew over Japanese territory. These missile launches constitute a clear and serious challenge to the international community and cannot be tolerated. He then reiterated that it is essential for the international community to come together and fully implement the relevant United Nations Security Council resolutions (UNSCRs) for achieving the CVID (complete, verifiable and irreversible dismantlement) of all weapons of mass destruction and ballistic missiles of all ranges of North Korea. Furthermore, Prime Minister Kishida asked for continued understanding and cooperation toward the immediate resolution of the abductions issue.
Other countries also expressed concerns about the recent lunches of ballistic missiles by . The importance of the denuclearization of the Korean Peninsula and of the full implementation of the relevant UNSCRs was also mentioned.]

(3) Situation in Myanmar
Prime Minister Kishida stated that Japan seriously deplores the deteriorating situation in Myanmar and would continue its utmost support for ASEAN’s efforts for the implementation of the “Five-Point Consensus.”

3. Concluding remarks
In closing, Prime Minister Kishida expressed his intention to deepen cooperation under ASEAN Plus Three framework in order to maintain and strengthen a free and open international order based on the rule of law, not force, in the region.