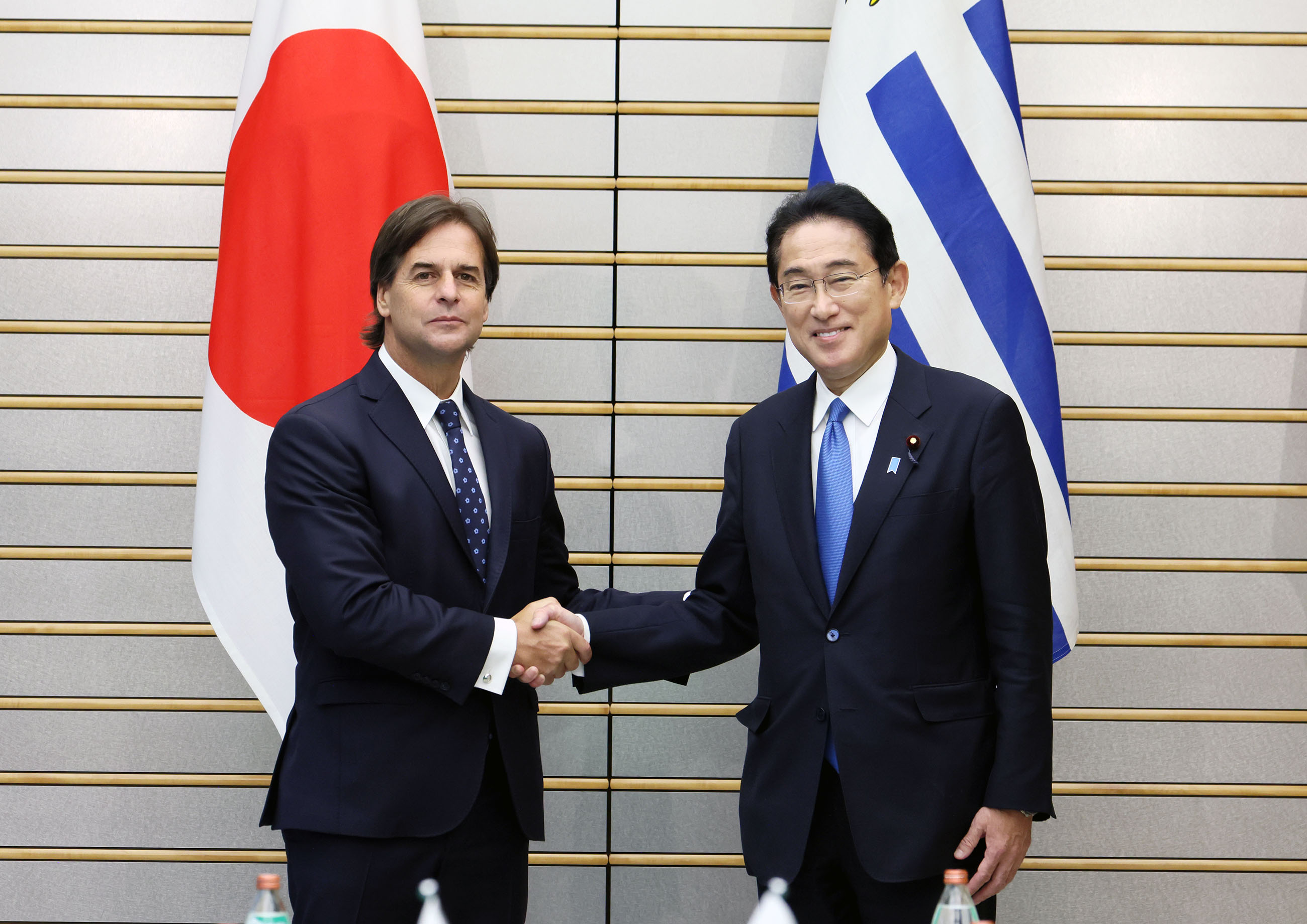 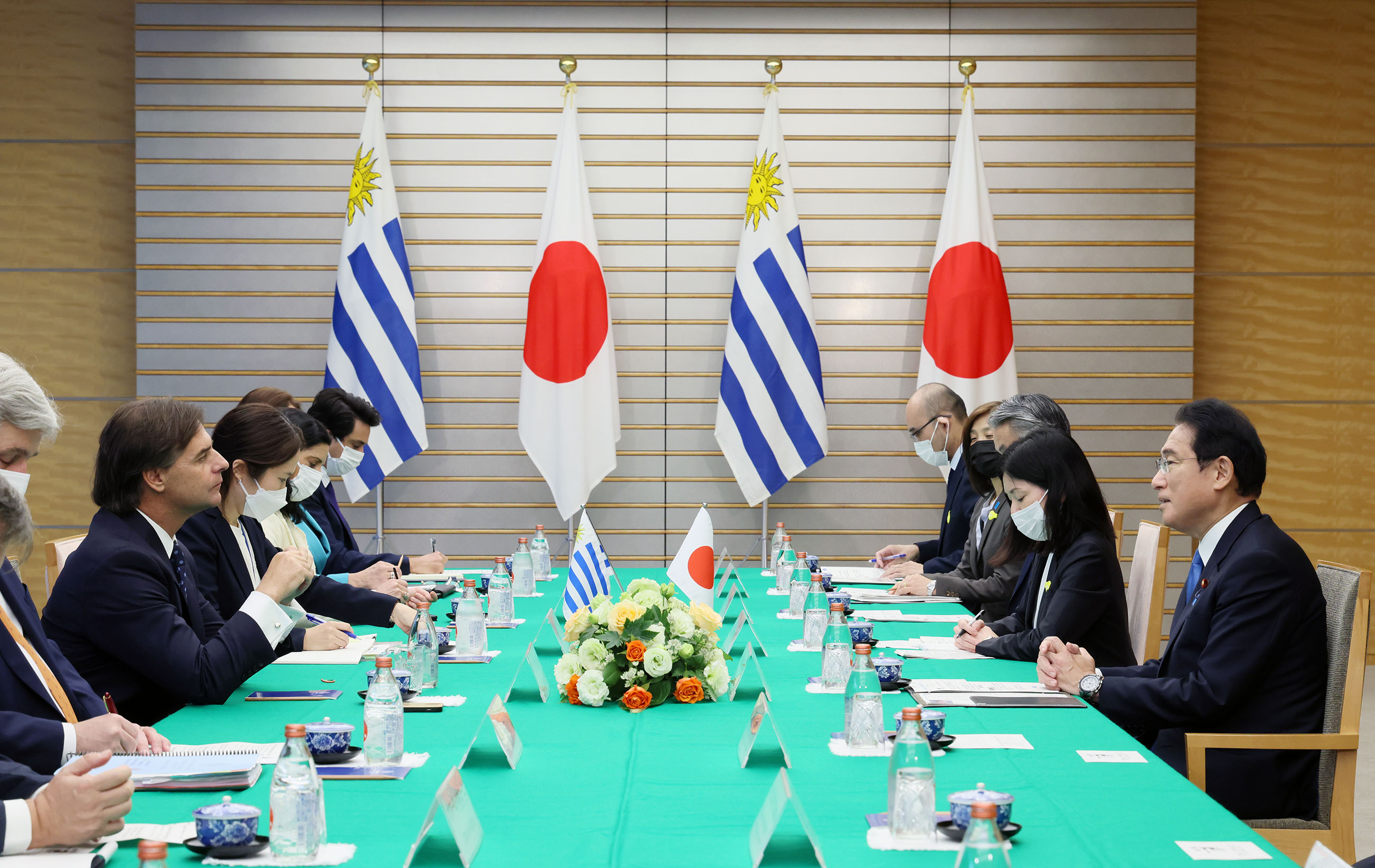 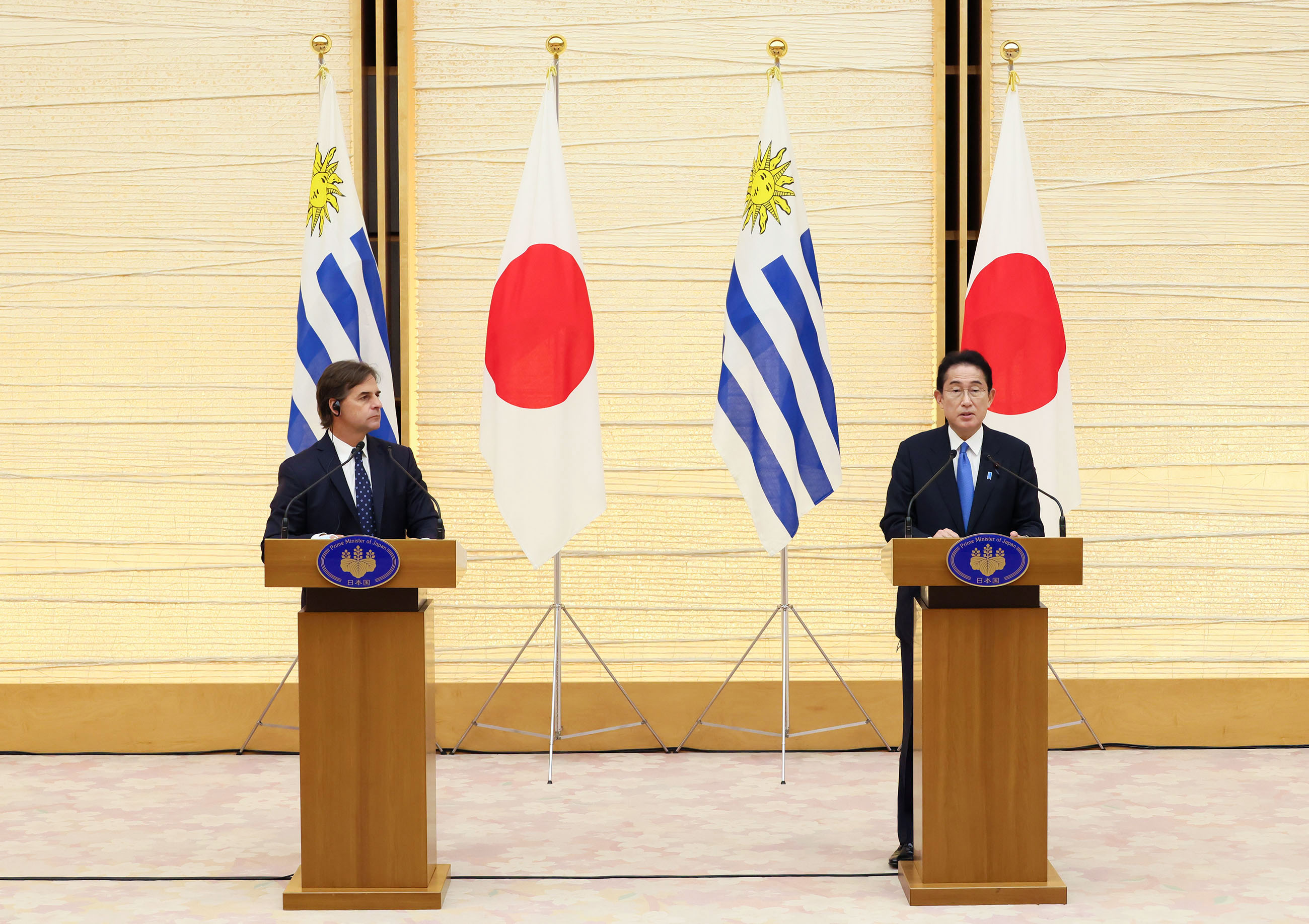 On October 28, commencing at 11:40 a.m., for approximately 40 minutes, Prime Minister KISHIDA Fumio held a Japan-Uruguay Summit Meeting with H.E. Mr. Luis Lacalle Pou, President of the Oriental Republic of Uruguay, who was on an official working visit to Japan. Following a joint press announcement, the two leaders held a working lunch from 12:45 p.m., approximately for 45 minutes. The overview of the meeting is as follows. The two leaders also issued the Japan-Uruguay Joint Statement.

1. Introduction
(1) Prime Minister Kishida stated that Uruguay, which celebrated the 100th anniversary of the establishment of diplomatic relations with Japan last year, is an important partner that shares fundamental values such as freedom, democracy, transparency, human rights and the rule of law.

(2) In response, President Lacalle Pou stated that he is pleased to be able to visit Japan this year, which marks the beginning of a new century of bilateral relations, and expressed his desire to further advance bilateral relations in various fields, including trade and investment.

2. Bilateral relations
The two leaders acknowledged that both countries have great economic potential and decided to establish the Joint Committee between the two governments to discuss mainly bilateral economic relations. They also welcomed recent developments such as the entry into force of the Customs Mutual Assistance Agreement and the Tax Convention between the two countries, and shared their views on the promotion of public-private cooperation in the digital sector. Furthermore, they welcomed the introduction of the working holiday program, which will contribute to the exchange of the youth of the two countries.

3. Cooperation in the international arena
(1) Prime Minister Kishida stressed that Japan will promote realistic and practical efforts toward nuclear disarmament in line with the "Hiroshima Action Plan" announced at the Tenth NPT Review Conference in August. The two leaders shared their views that they would continue to work together to realize a world without nuclear weapons, including through maintaining and strengthening the NPT regime.

(2) The two leaders shared their view that it is essential to strengthen the functions of the United Nations, including Security Council reform. Prime Minister Kishida also expressed his gratitude for Uruguay's support for Japan's permanent membership in the Security Council.

4. Regional and international affairs
(1) The two leaders concurred on recognition that unilateral attempts to change the status quo by force must not be tolerated anywhere in the world, and that a united response by the international community is necessary. Prime Minister Kishida then stated that Japan is promoting efforts toward the realization of a "Free and Open Indo-Pacific (FOIP)" and would like to cooperate with Uruguay, of which President Lacalle Pou expressed his understanding.

(2) Both leaders strongly condemned Russia's aggression against Ukraine and shared their view that Russia's nuclear threats are unacceptable at all.

(3) The two leaders also discussed regional situations, such as the East and South China Seas, and the response to North Korea (which launched missiles even during this summit meeting) including the nuclear and missile issues and the abduction issue, and they affirmed their continued cooperation.