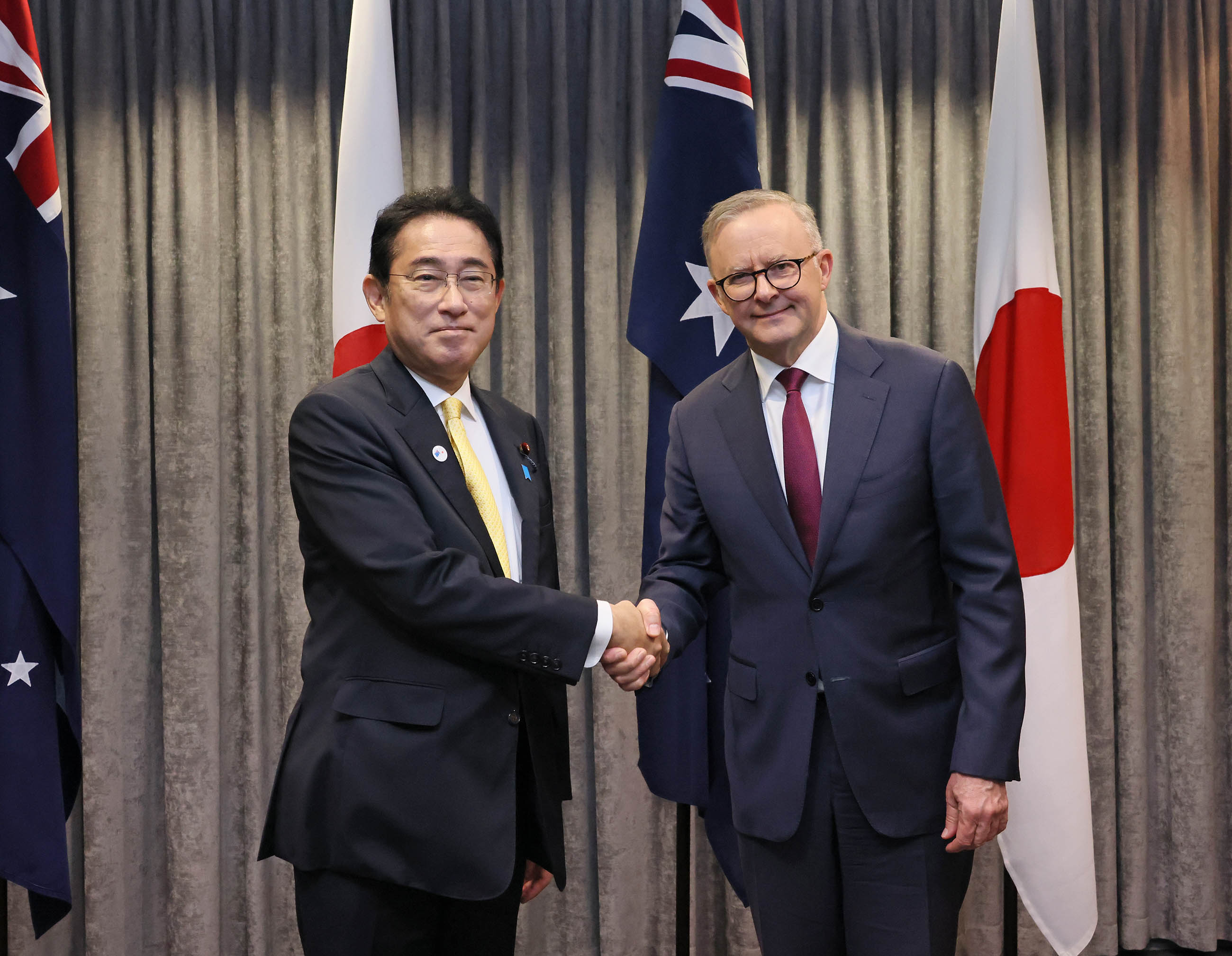 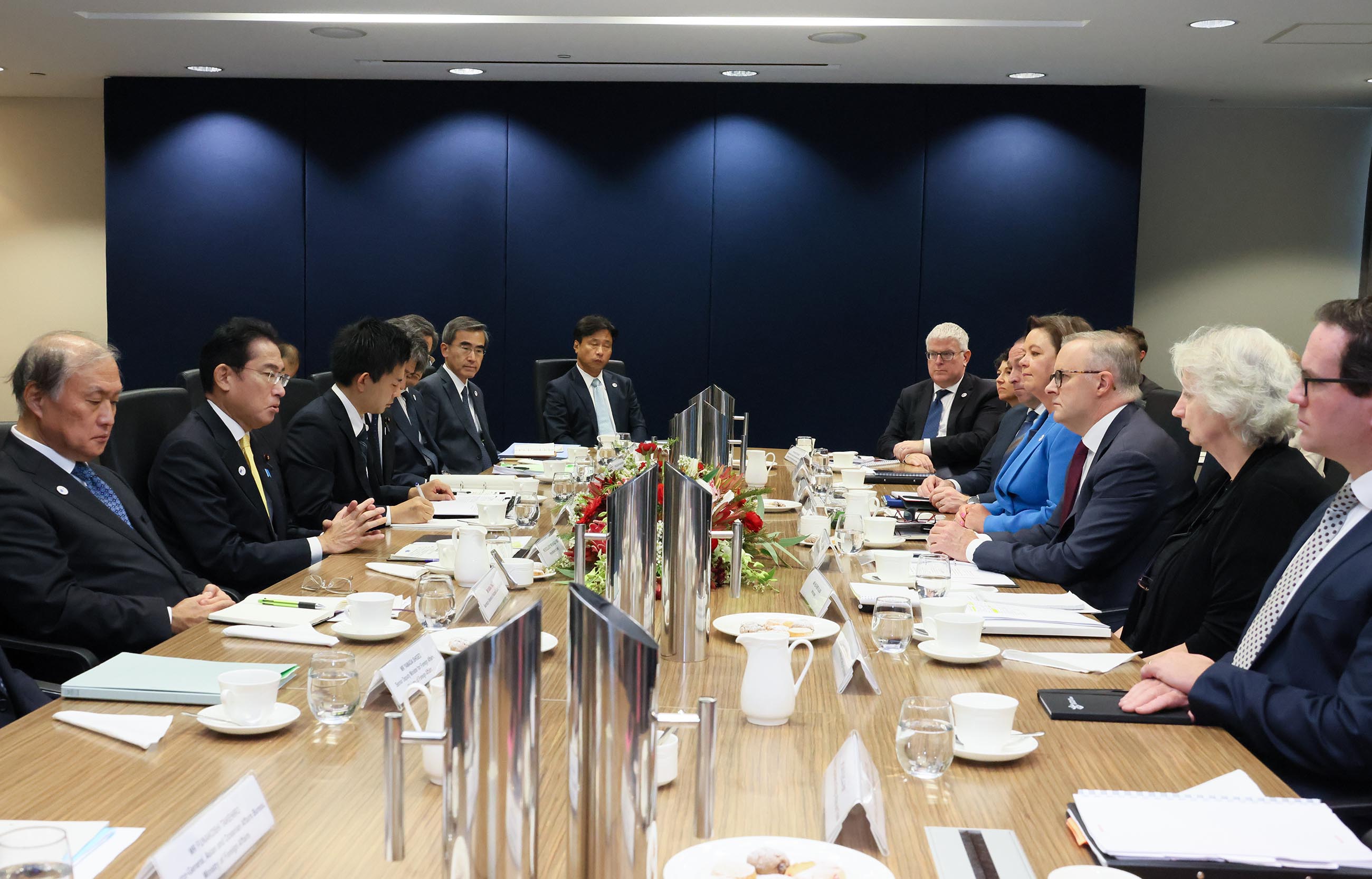 3. The two leaders concurred to lead a multilayered effort to realize a "Free and Open Indo-Pacific," including Japan-Australia-India-U.S. (Quad), Japan-U.S.-Australia and NATO Asia Pacific partners (AP4), and Prime Minister Kishida expressed his willingness to cooperate for the Quad Leaders’ Summit hosted by Australia next year. The two leaders also discussed the East and South China Seas, peace and stability in the Taiwan Strait and the situation in the Pacific Island countries. The two leaders confirmed the Joint Statement, which indicates their shared recognition including on these matters.

4. Against the backdrop of the Ukraine situation causing resource and energy security to rise in importance, Prime Minister Albanese explained the position of the Government of Australia that Australia continues to be a reliable trade partner and a secure investment recipient. The two leaders continued to further strengthen Japan-Australia cooperation in the fields of resources and energy. Prime Minister Kishida also welcomed the progress of a number of Japan-Australia projects in the hydrogen and ammonia sectors as part of the Green Transformation (GX), and the two leaders concurred to further develop cooperation through implementation of the Paris Agreement on climate change, cooperation on adaptation and mitigation assistance to neighboring countries, and partnership on critical minerals. Prime Minister Kishida also mentioned the “Asia Zero Emissions Community” Comcept and Prime Minister Albanese expressed his support for it.

5. The two leaders shared the view that North Korea's extremely frequent ballistic missile launches are a serious and imminent threat to the security of the region and international community, and that they would continue to work closely together on the response to North Korea, including the nuclear and missile issues and the abductions issue.

6. Prime Minister Kishida emphasized that Russia's suggestion regarding the use of nuclear weapons in Ukraine is an extremely serious situation, and that the very fact that no nuclear weapon has been used for the past 77 years since the atomic bombings of Hiroshima and Nagasaki must not be ignored. In this regard, the two leaders condemned Russia’s threat to use nuclear weapons as a serious and unacceptable menace to the peace and security of the international community, and stressed that any use of nuclear weapons would meet with unequivocal international opprobrium and resolute responses.

7. The two leaders also discussed the areas of nuclear disarmament and non-proliferation, and Prime Minister Kishida expressed his appreciation for Australia's cooperation in the High-Level Meeting of the Friends of the Comprehensive Nuclear Test Ban Treaty (CTBT) held last month.

8. The two leaders had a frank discussion on the Comprehensive and Progressive Agreement for the Trans-Pacific Partnership (TPP11) from a strategic perspective and shared the view to continue to work closely together. The two leaders also confirmed that they will work together in dealing with economic coercion.

9. After the Leaders' Meeting, the two leaders issued the Japan-Australia Leaders’ Meeting Joint Statement and signed a new Japan-Australia Joint Declaration on Security Cooperation. In addition, Australia-Japan critical minerals partnership was signed by Ministry of Economy, Trade and Industry of Japan and Department of Industry, Science and Resources and Department of Foreign Affairs and Trade of Australia, in the presence of the leaders.