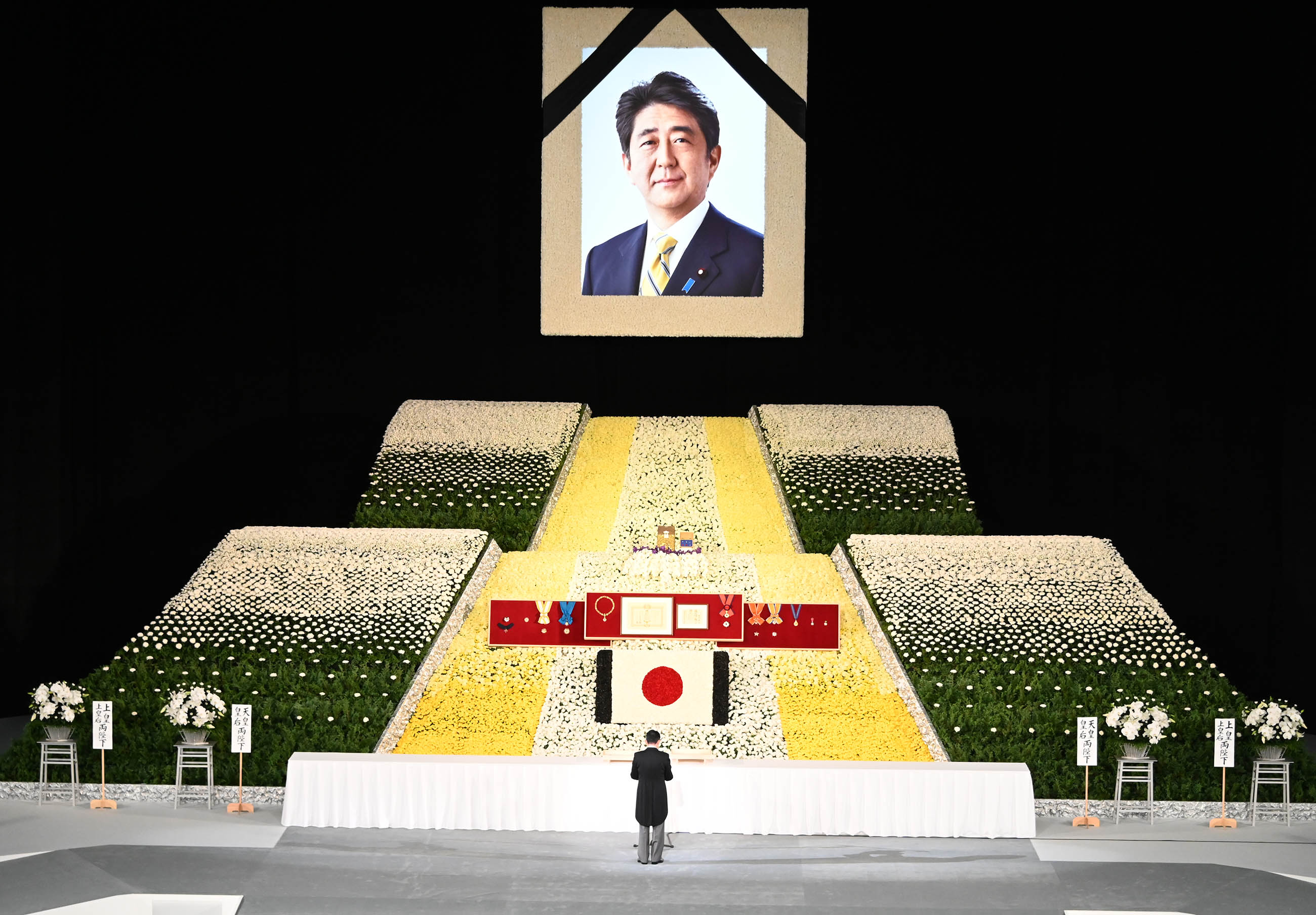 Photograph of the Prime Minister delivering a memorial address (1) 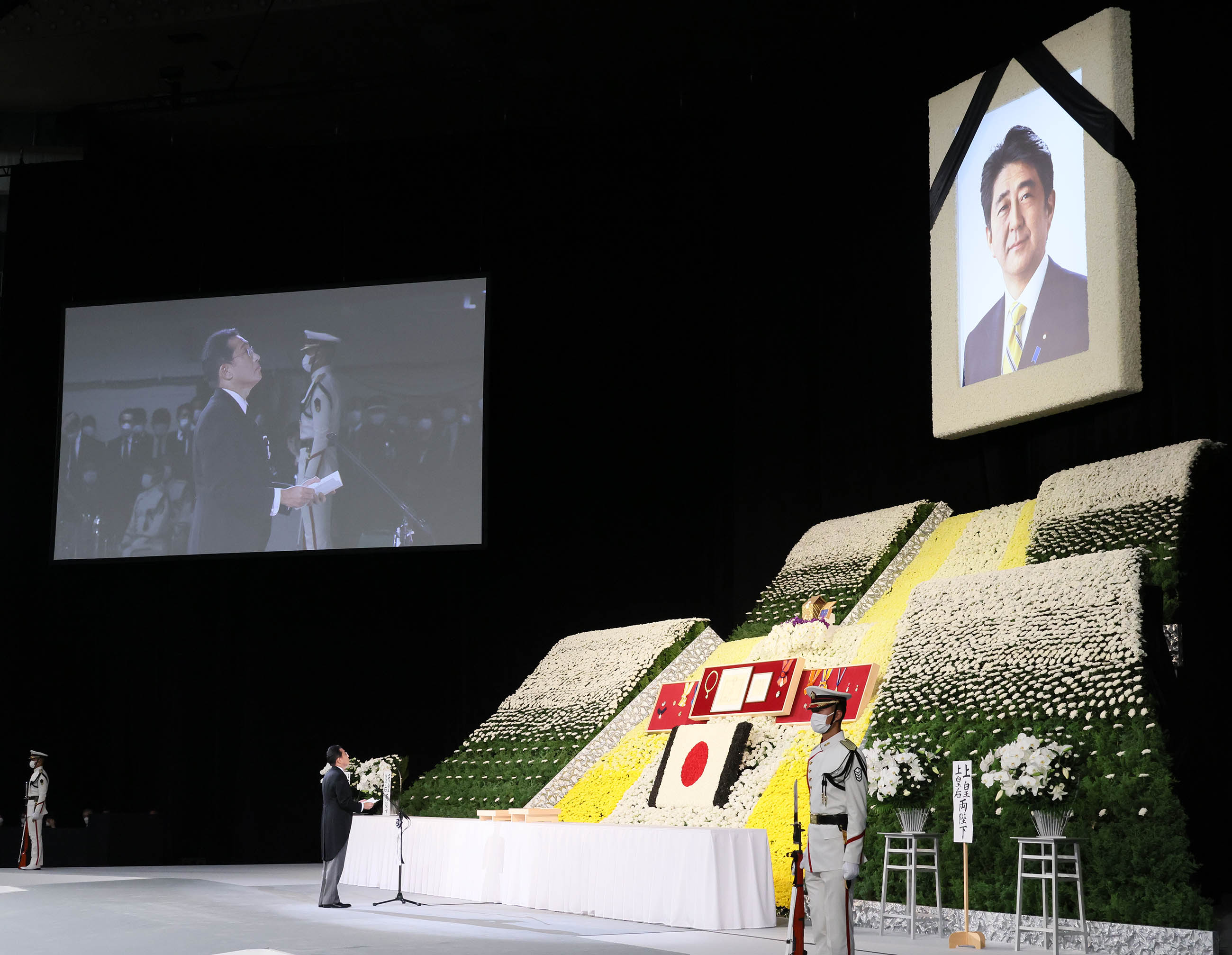 Photograph of the Prime Minister delivering a memorial address (2) 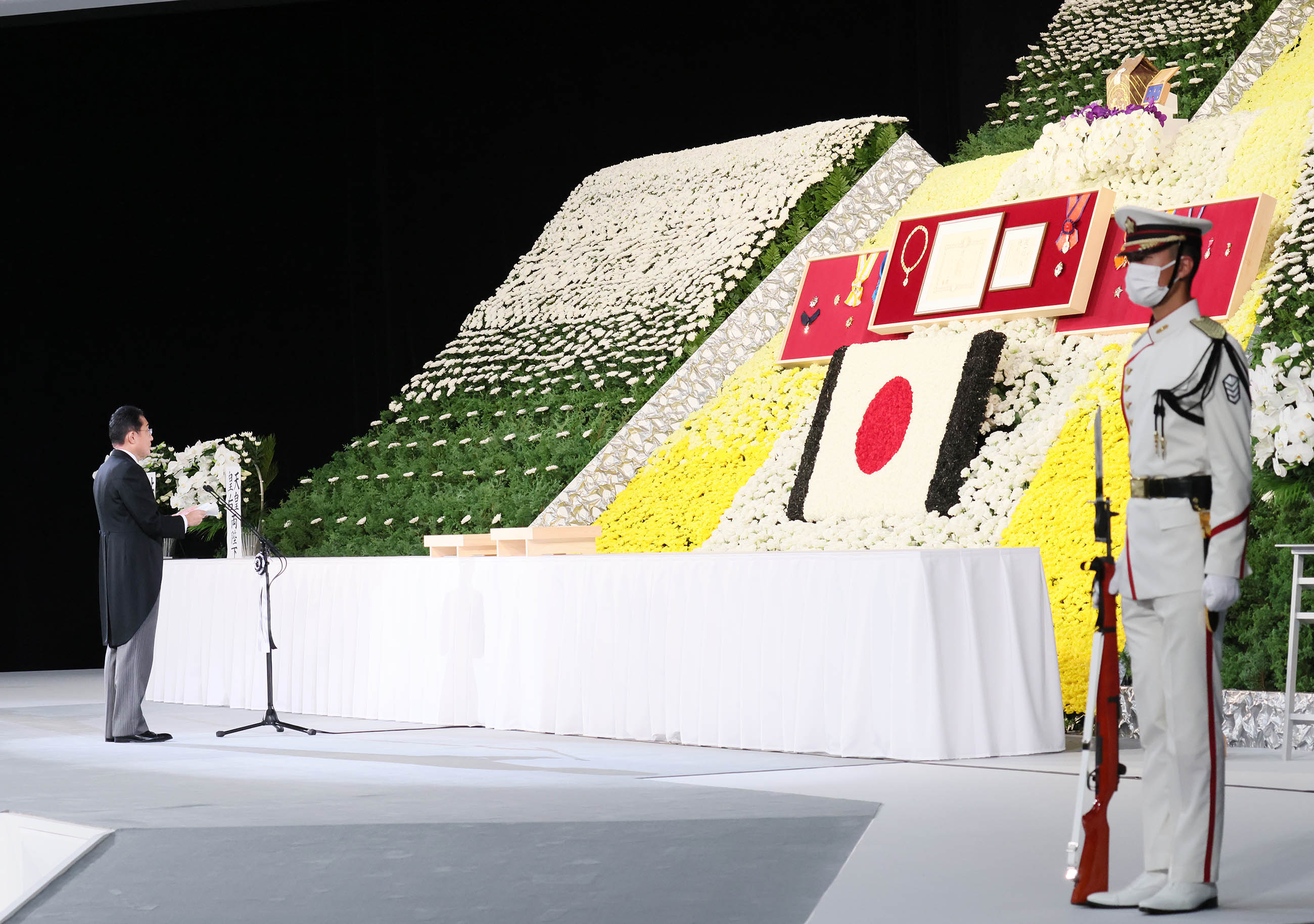 Photograph of the Prime Minister delivering a memorial address (3) 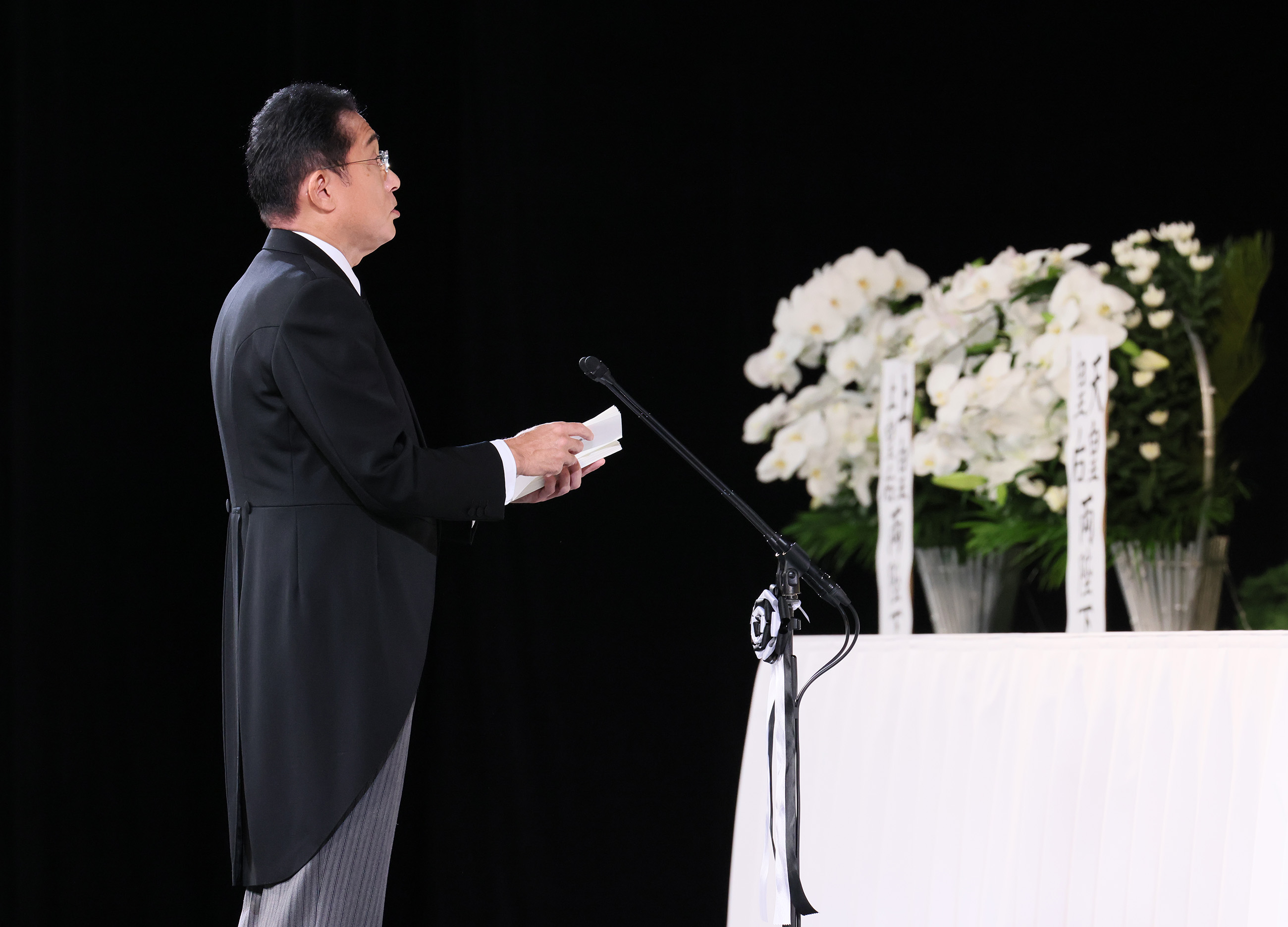 Photograph of the Prime Minister delivering a memorial address (4) 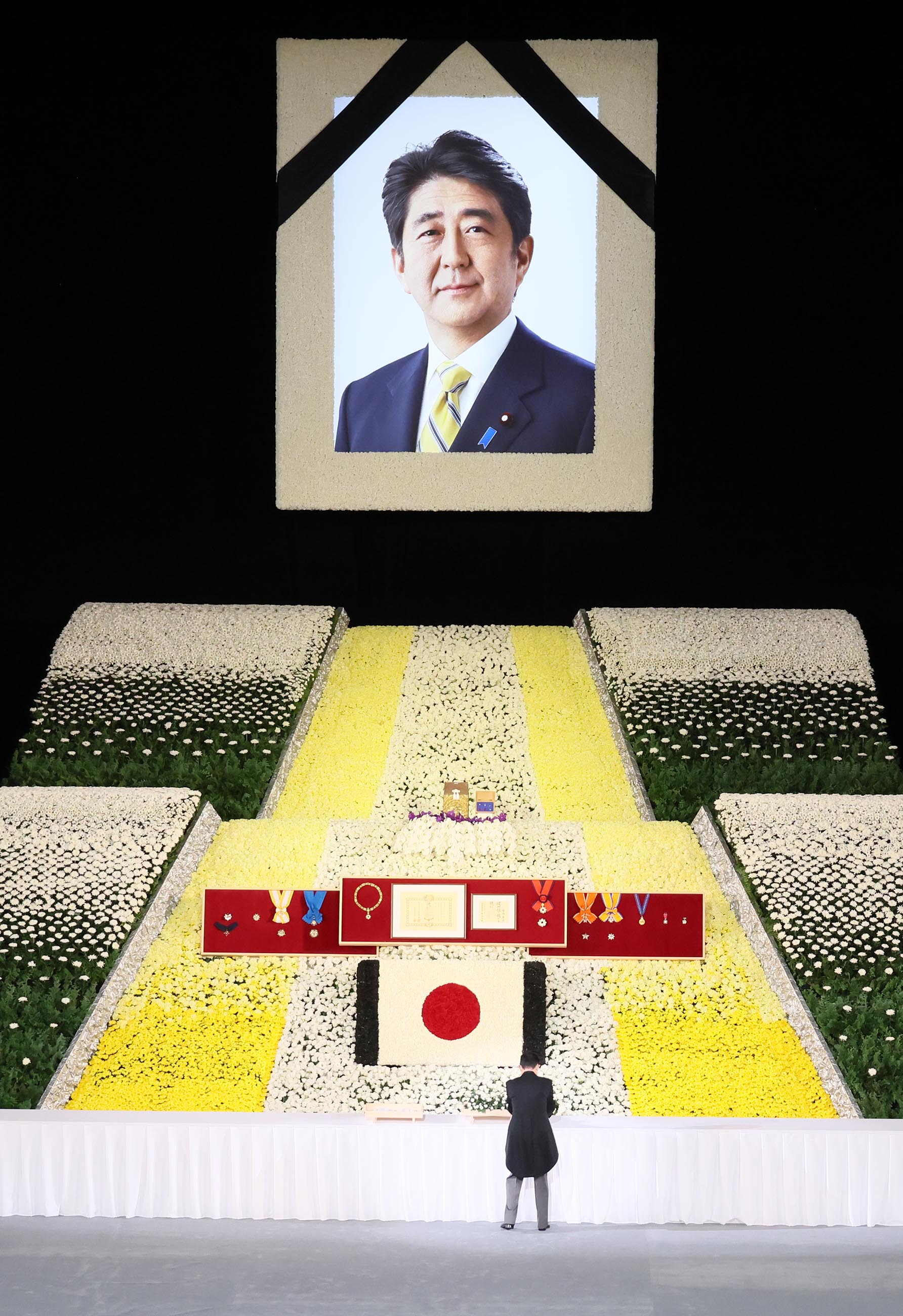 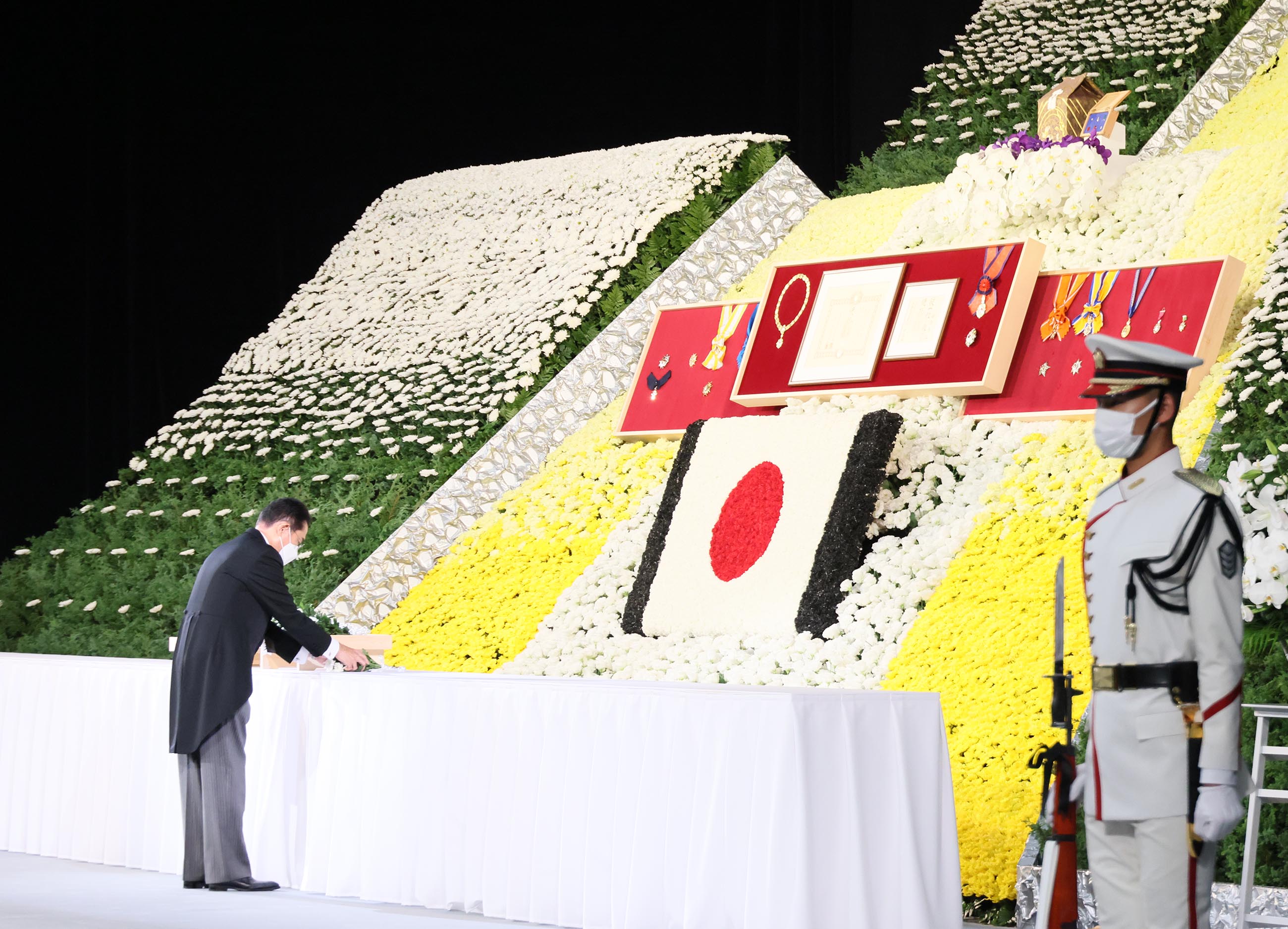 The Prime Minister offered a silent prayer and delivered a memorial address, followed by the offering of flowers.

The Prime Minister said in his memorial address,

"At the opening of the state funeral for Mr. ABE Shinzo, former Prime Minister, Junior First Rank of Court, and recipient of the Collar of the Supreme Order of the Chrysanthemum, it is with great reverence that I deliver this address on behalf of the Government to offer my heartfelt respects for the departed.

On July 8, as the election campaign entered its final stage, Abe-san, you addressed a crowd passionately about the path forward this country should take, just as you always did.

That was suddenly pierced by violence as something utterly reprehensible occurred.

Who among us could have predicted, even in the slightest measure, that such a day would come? Abe-san, you were someone we needed to stay with us for much, much longer.

There was never a doubt in my mind that you would continue to do your utmost as a compass, pointing the way for Japan and the world for another decade, even two, into the future.

But that expectation was by no means limited to me. Here today to mourn your passing are participants from every quarter of Japanese society as well as countries and
regions around the globe. They are all of the same mind as they gaze upon you.

And yet there is no hope for that ever to be realized. It is disappointing beyond words and a matter of the most profound regret.

You and I were both first elected to the Diet 29 years ago, in the 40th House of Representatives general election, and it was together that we plunged into the world of politics.

We were members of the same incoming class of freshman legislators, and I watched you closely as you tirelessly applied yourself to study and in-depth research into national security and diplomacy as well as the economy and social security.

I know that more than anything else, you deepened your interest in the cases of abductions of Japanese nationals by North Korea, having held an intense outrage and an extraordinary sense of justice about that from well before you gained your seat in the legislature.

I can hardly imagine the regret you must have felt in not having ultimately succeeded in bringing the abductees back to Japan. To fulfil your last wishes, I will do everything in my power to enable the abductees to return to their families, who long to welcome them home.

Now I fondly recall watching excitedly and with anticipation in those days as you, serving as the flag bearer for our generation, took on fundamental challenges facing our nation that had remained unchanged since the war, first one and then another.

You were always emphatic that our nation Japan is a country blessed with stunning natural beauty, a rich history, and unique culture. It continues to hold tremendous potential.

What will showcase that potential fully is our courage, our wisdom, and our efforts. Let us take pride in being Japanese and discuss what we should do for the future of Japan.

That message to the Japanese people you delivered as our youngest post-war prime minister was simple and clear.

By elevating the Defence Agency to the Ministry of Defence, thereby enabling it to formulate its own budget, enacting the National Referendum Law, and building major bridges towards constitutional reform, you extricated the nation from its post-war regime.

You also revised the Fundamental Law of Education for the first time in roughly six decades, planting the seeds for a new Japanese identity.

Standing before the Parliament of the Republic of India, you advocated "the confluence of the two seas," putting forth for the first time the concept of the Indo-Pacific.

All of these form the cornerstone that still stands firm in the present day.

At around that time in a Diet session you fielded the question, "What, exactly, characterizes a prime minister?" to which you replied that a prime minister is not a metal casting that can be made by simply pouring molten iron into a mould.

Instead, you claimed, a prime minister is forged metal, which takes its shape only by being struck time and time again. That illustration is entirely fitting for a person who began his working life in the steel industry.

For someone like yourself, there must have been nothing more trying than having to end your tenure as prime minister after only one year. But we know very well what was to follow.

Until you once again took office as prime minister in the closing days of 2012, you disciplined yourself to become metal thoroughly forged, far stronger than before.

You who advocated "the confluence of the two seas" deepened that concept further, cultivating it to become the framework of a "Free and Open Indo-Pacific" that encompasses many countries and includes massive numbers of people.

You not only markedly strengthened our ties with the United States and dramatically reinforced Japan-U.S. deterrence but also enhanced our cooperation with India and Australia to form the "Quad" framework, based on reasoning you had long promoted.

Your multi-layered diplomacy fostered favourable relations with every region in the world without exception.

By concluding an Economic Partnership Agreement and a Strategic Partnership Agreement with Europe and pursuing straightforward diplomacy that was decisive to a degree heretofore unseen, you built deep cooperative relations one after another with the Asia region, the Eurasia region, the Middle East, Africa, and Latin America and the Caribbean region.

The path to getting the Legislation for Peace and Security, the Special Intelligence Protection Act, and other laws passed was extremely arduous, but you overcame it all and brought those bills to enactment. In so doing, you succeeded in maintaining Japan's national security at an even higher level.

It was Mr. Abe Shinzo who made the greatest efforts of anyone, anywhere on earth to maintain and improve an open international order that values freedom, democracy, human rights, and the rule of law and forms a dependable roof that enables the security of Japan, the region, and indeed the entire world.

It is one of the proudest achievements of my life that I, as your Minister for Foreign Affairs, and I as your close friend who experienced the same era as you, was privileged to join your cabinet and single-mindedly engage in work that expanded Japan's diplomatic horizons.

Here in Japan, you showered young people, and women in particular, with encouragement. By easing the burden of childrearing as much as possible, you worked to raise the birth rate to the level desired by the public.

Your determination to raise the consumption tax rate solely to use the resulting increased revenue to help lower day-care costs and tuition fees stemmed from your belief that Japan's young people would most certainly propel Japan forward from then on by producing something new, once their faith in themselves was restored.

While you may indeed have led the longest-serving administration since our nation adopted constitutional government, history will remember you not for the length of your time in office but for the achievements you made.

You once quoted NITOBE Inazō in an address you delivered at the graduation ceremony of the National Defence Academy, saying, "Courage is doing what is right."

Abe-san, you were indeed a man of courage.

I will forever remember you fondly as a man of wholehearted sincerity and exquisite compassion who took the utmost care of his friends, and as a husband who loved his wife Akie profoundly.

There is no question that many people the world over reminisce over you, talking about Japan by saying, "When Mr. Abe was prime minister" or "In the Prime Minister Abe era."

I will end my remarks with a pledge, that using the foundation you laid, I will do my utmost to build a Japan, region, and world that is sustainable and inclusive, where everyone shines.

Rest well, after all that you have done for our nation. And thank you most sincerely. May you rest in eternal peace."